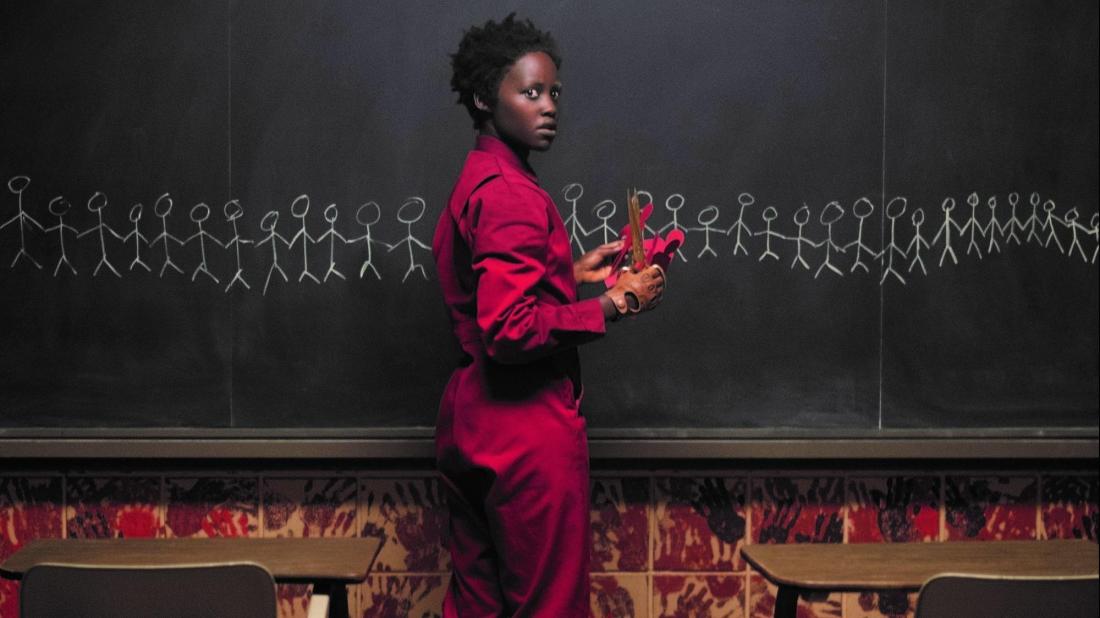 Jordan Peele is a stranger to nobody. Stepping onto the scene in 2017 with a jaw-dropping thriller, he’s come back for his second film, Us. His first film, Get Out, was a satirical nail-biter that drew audiences in with its deep metaphors about race and mind control. In that movie, Peele transformed the typical “evil family in the middle of nowhere” story and elevated its value, winning him an Oscar for best screenplay.

But his second film does not serve as a sequel or a counterpart to Get Out. Us is its own entity that stands out not only against his first film, but every single horror movie from the past decade. From a deeply reflective concept, stunning acting, and a unique message, Peele serves audiences a new perspective on society and shines a light on a new type of horror film.

The opening scenes offer a vital piece of information that explains why the rest of the movie happens. A young girl is at the Santa Cruz fair with her parents. When they aren’t watching, she sneaks off and finds herself in a house of mirrors. She ends up finding herself, but it isn’t a reflection. It’s another version of her. The scenes open to an eery sequence of images of white rabbits held in cages with a pungent red font depicting the opening credits. The film leaves an unsettling feeling in the audience with its haunting images and unanswered questions.

The movie opens up to the leads, a family driving down to Santa Cruz for a week-long vacation in which the wife and mother, Adelaide, is the young girl who witnessed her counterpart in the house of mirrors when she was younger. This distinction is important as she becomes paranoid about her doppelganger coming back to find her and seek revenge. She was right.

Eventually, a frighteningly silent family adorned in red comes to their house in the middle of the night, and a battle to the death ensues as each character fights their doppelganger that has come to claim their lives. These doppelgangers are a government project abandoned long ago, and they’ve formulated a plan to claim the lives of their counterparts living in everyday society. In the end, the family on top rises victorious, but it wasn’t without some serious consequences.

Peele’s take on a horror film transformed any preconceived notions into what a horror film should be. Although his film was original, he wasn’t shy to take elements from other films like The Goonies, Jaws, and The Shining. Peele isn’t the typical movie maker. From his cast to his ideas, he does not stay in the bubble. Us is not a typical horror slasher film, nor is it a typical comedy film. He blends various styles of horror, thriller, and comedy that doesn’t strike as being one or the other.

What stands out in this film isn’t the originality, it was the stunning acting and development of each character. Unlike other horror films, where characters lack depth and are outsmarted by the audience, the characters in this film are smart enough to outwit those who have been plotting to kill them their whole lives and tell jokes while they’re at it.

As for the acting, playing one role is hard enough, but having to play two in the same movie? That’s a feat. Adelaide, the protagonist, and Red, the antagonist, were played by the same person, Lupita Nyong’o, and she deserves some acting nods. Winning best supporting actress in 12 Years a Slave and starring in the critically acclaimed and Oscar-winning Black Panther, Nyong’o doesn’t disappoint. Her acting is raw and honest, playing up the emotion in Adelaide protecting her children to Rose’s terrifyingly precise movements and titillating voice.

Initially being compared to Get Out, this movie quickly fell out of that dynamic as its own qualities stood out against not only Peele’s first film but all other movies in its genre. From the distinctive plot to the phenomenal acting, this movie is bringing back excitement to a what-could’ve-been dead genre. With Peele on its side, horror films may find their place on the big screen again.

Lupita Nyong’o shines in this film with not only stunning acting, but the ability to embody two starkly different characters in the same movie. (Photo Courtesy of the Chicago Tribune)