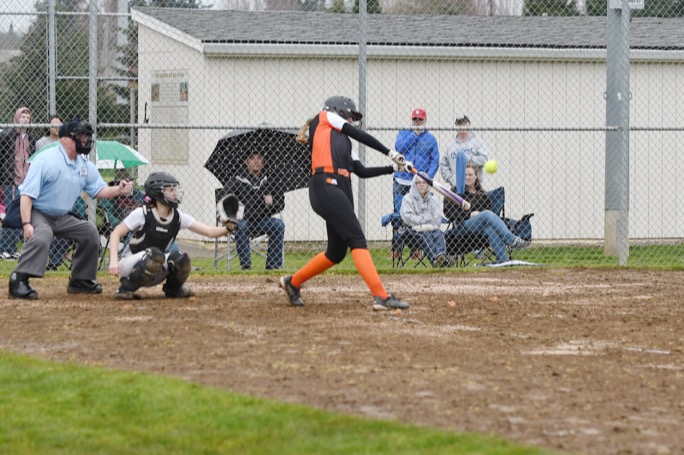 Entering the second half of the Metro League season, Beaverton faced Liberty once again. Inclement weather moved the game to a Sunset High School’s turf field where both teams were prepared to play rain or shine.

Previously, Beaverton and Liberty had a nail-biting extra inning game at Liberty that ended in a close score of  8-7, Beavers. This time it was Beaverton’s home game, giving Liberty the bat first. The Falcons were charged with aggressive energy as the first batter ripped a line-drive for a double out to center field. They scored in the first inning, giving them the advantage early in the game.

The Beavers came out slow in their first round of at bats. They went in anticipating to hit against Liberty’s starter pitcher who pitched in their first game against each other. The Beavers were a little off balance with timing due to this, resulting in the first batters grounding out and popping up.

In their at-bats that followed, the Beavers started to pick up the pace. Focusing in on “their pitch” and protecting the plate from the umpire’s large strike-zone, the Beaverton Batters began to hit solid shots. However, their efforts were just short of getting baserunners and potential scorers as Liberty’s defense was able to keep the ball in the infield to get outs.

Senior Emma Brockmann shared, “Our hits weren’t necessarily landing as a whole. We were hitting great shots and hard ground balls but they weren’t always finding holes in their defense.”

The fourth inning was hot for the Beavers as they were able to get the bases loaded and score two runs off of walks and one more from a base hit by sophomore Angelina Baseleon. The Beavers were then up 3-2.

The Falcons were able to tie it up and by the seventh it was familiar scene: Tied in the last inning, potential extra innings to come. Junior Cierra Speck pitched a phenomenal game, her offspeed dominating Liberty’s batters. She struck out their first three batters twice and shut them down in the 6th and 7th.

In the bottom of the 7th, the score was 3-3. The first batter was Beaverton junior Marisa Arneson, who came off of the bench pinch hit. She solidly fouled off the first pitch only to make complete contact with the second one and drive it opposite field and over the fence for a walk-off home run to end the game.

She said, “I was nervous because it was my only chance to be in the game, and I was just hoping to make contact with the ball to get on base. I was telling myself to relax, focus on what I’ve worked on in practice with coaches, and just have fun. I was happy we had won and could contribute to our team’s success.”