The faces of Get Smart 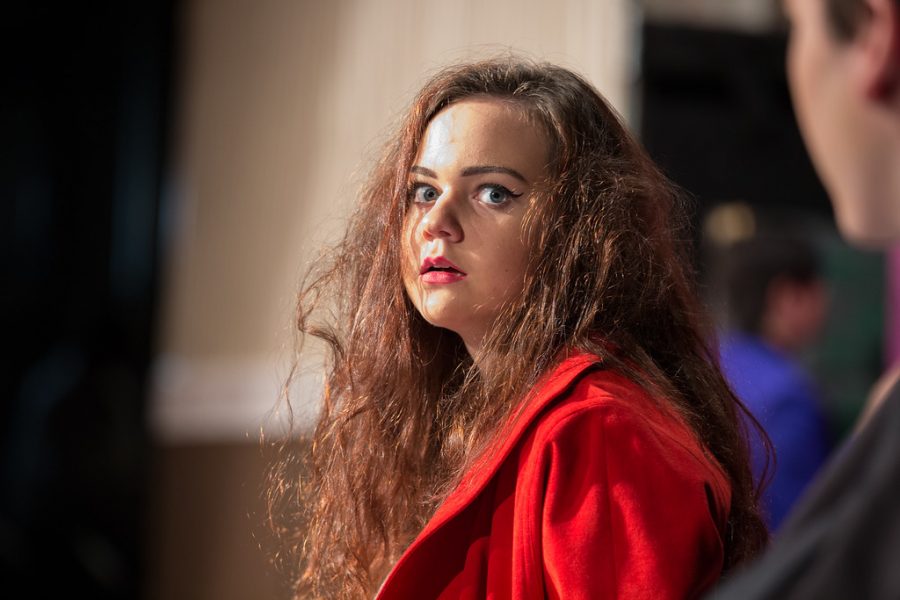 An inside look into the double-casted production of Get Smart, performed by Beaverton High School Theater.

Q: Who was your character?

A: I’m the chief. I’m head of ‘Control,’ the international organization of good and basically I’m Maxwell Smart’s boss and I also very hate him slash love him with this weird passion-thing. He always fails yet wins at the same time, so I basically tell him different things and organize his missions.

Q: What does the alpha process look like for you? [alpha is the theatre term metaphorically stepping into character]
A: I would probably just say channel my inner anger and spite.

Q: How many productions have you been in?
A: This is my 1st production

Q: What did you learn from playing Agent 99?
A: Something I found out about myself is that it is really fun to be sneaky.

Q: Describe the character you played.
A: I play Agent 99 which is an agent who works for Max Smart and she’s in love with him and she’s also really smart and a bad-ass and kind of ditsy sometimes.

Q: What is similar between you and Agent 99?
A: I resemble Agent 99 because I am somewhat reserved but when I need to I can pull an act.

Q: Did you learn anything from playing agent 99?
A: I learned to walk with one heel because I had to talk through my heel-phone and then walk around so that was pretty cool!

Q: What is your favorite part of the rehearsal process?
A: For me it would probably be when we get to add our own little jokes or put in little inside jokes of the cast and stuff like that into the show.

Q: What was your method for stepping into character?
A: For me, I just try to channel the bumbling idiot that’s deep inside of me and that is a core of my person and just trying to figure out how to be like a very confident person when I have no right to be and so it has mostly been like trying to think ‘how am I supposed to give off this aura of being confident but a complete and total failure at the same time.’

Q: What have you learned from portraying this character?
A: If anything, it makes it a bit easier to accept those moments when I do insanely stupid things, because I have a lot of those moments where I do something really stupid but somehow I pull it off in a really weird way and that just kinda helps me be like ‘hey, that’s not the worst thing.’

Q: How many shows have you done before, both in general and Beaverton High School?
A: At Beaverton High School, this will be my fourth show I think. In general, it’s about my fifth or sixth show –I did plays for my church. Last year I did Breakfast Club[,] 1984 and Night of the Living Dead.

Q: Describe the character you played.
A: He’s the lead character in Get Smart. He’s kinda your stereotypical not-quite-sure-what’s-going-on, only he has an ‘extra helping’ of confidence that kinda goes along with that –very much unearned. So, the play kinda follows him and how he gets into these situations which require quite a very particular set of skills which he lacks, but seems to think that he has and how luck his way through all of it along with the help of his training partner ‘99.’

Q: What were some of the things you tried in order to step into this character that you might not need to deploy [for] other characters?
A: Voices is probably the number one thing; I’ve been trying all sorts of different voices for this character just to see if there’s one that I can use that will add anything to him and his character that would reflect who he is as a person. Also, stance –it’s such a big thing that I’m not sure how I’m going to incorporate but just the way you stand on a stage can help reflect on your character and with characters I’ve done previously, even though they’ve been very deep, it’s been kinda easy because I have related to them on a personal level. This guy [chuckles] it is a little bit different. He is kinda just bumbling around and thinks he’s doing what he’s suppose to which –I guess– is me in school on a certain note…

Q: What have you discovered about yourself after playing Mr. Big?
A: I have found out that I much prefer sophisticated evil over cartoony evil, but unfortunately I have to be cartoony evil so that is something new that I am trying out this time.

Q: Share some insight about your character:
A: My character’s name is Mr. Big. He is the head of the evil organization ‘Kaos’ with a ‘k’. Yeah so it’s really evil and his [I should say her plan] plan is to destroy the world basically using this ‘enthermo’ that the good guys have built and so we stole it and now we plan to take over.

Q: How does it feel to have a lead your first show around?
A: Pretty exciting, actually. Most of my friends, they usually got the leads I’m like ‘why am I always part of the chorus?’ Well, it turns out this is the perfect role.

Q: Describe your character.
A: I’m playing Mr. Big. I’m the bad guy, technically the villain… I’m the head of ‘Kaos,’ which is the villain agency and I’m trying to defeat Maxwell Smart with this instrument called the ‘Enthermo.’

Q: What/Who helped you step into the character of Mr. Big?
A: I basically learn from all my role models: Alan Rickman; he played Snape, Judge Turpin–He’s an amazing guy, but he doesn’t see any of his characters as the villain and I don’t see Mr. Big as the villain. I see him as a person and so I just try to fill him out as a person as much as I can while also trying to follow his motives.

Q: What have you learned from portraying this character?
A: Well, I’m very sly and I’m a very leadership-kind of person now and so I think I got a lot of my actual characteristics from Mr. Big because I’m like ‘I’m the leader of Kaos. I’m the leader of all of you. Bow down to me and do all my dirty work.’