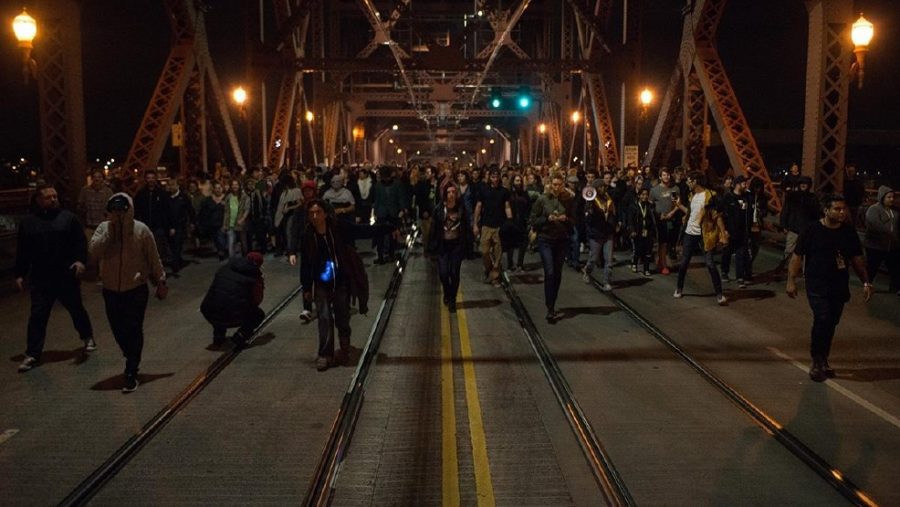 Protestors march on across the Hawthorne Bridge.

Starting with a rally of several hundred at the city hall, but as the number of people grew, they took to the streets to march. Some stayed behind to continue their quiet protest, but those who marched on ended up blocking off streets and traffic, closing roads and delaying Trimet.

Spanning across blocks and bridges, it was a relatively peaceful march at first, but was eventually declared a riot on Thursday night by the Portland police, due to a small group of protesters becoming violent. Police were present in riot gear, pushing the protesters back from straying away from the crowd. The protest was allowed, only if protesters stayed on the specific route. Strays were faced with tear gas, flashbang grenades and pepper spray.

The protests continued through the early hours of Saturday morning, and many dispersed when there was a shooting on the Morrison Bridge. Police forces dispatched more tear gas, leaving some laying in the streets, unable to see or move. This also caused more altercations with protesters and anti-protesters.

Finally, on Sunday morning, hundreds gathered at the waterfront park, not to march, but to hold a vigil dedicated to the unrest that spanned over the past five days. Over 70 people were arrested, people were injured, not only from people against the protest, but major injuries due to police force. The vigil offered a chance at unity, away from police and away from violence.

The Portland Resistance Facebook page, who organized the vigil as well as the original peaceful protest stated, “This will be with respect to the victims of last nights attack, as well as individuals in marginalized communities who have suffered at the hands of the establishment.”