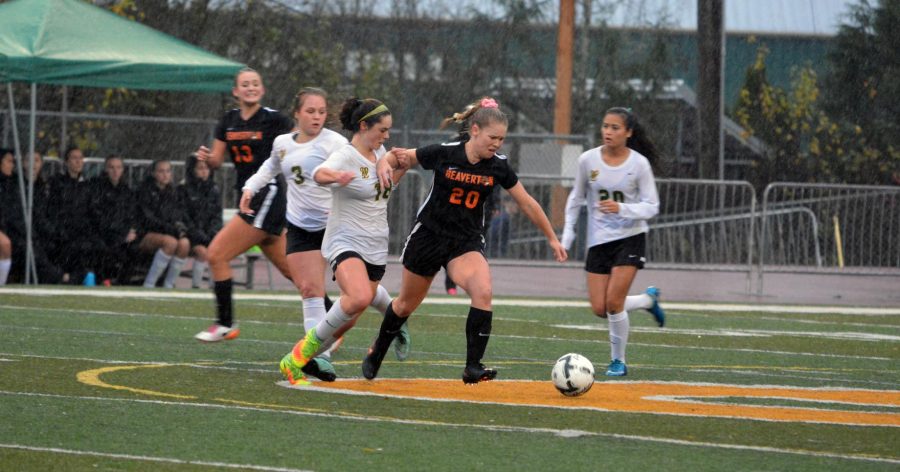 Maddie McKenna drives her way to the goal against West Linn on November 5th.

Girls soccer carried their phenomenal season to the third round of state playoffs. The girls’ soccer team started their season with an undefeated pre-league play. Still strong going into Metro League, one of the most difficult leagues in the state, Beaverton held their own and stood mid-pack at 5th.

The Beavers had a slow start to the first quarter on the 29th against North Medford. Within minutes, North Medford pulled ahead in the first half to leave the Beavers trailing 0-1. Though they were down, the girls’ team mustered up some fight when senior Macey Lane scored at the end of the second half.

The score, 1-1, lead into overtime as the Beavers buckled down to defeat the Black Tornado. In a nail-biting first half of overtime, Natalie Perkins assisted Maddie McKenna with a goal in the last five minutes of the first ten-minute half. The girls’ soccer team held North Medford in the second half for a 2-1 Beaverton victory.

Going into the second round of playoffs, the Beavers faced a long-time rival, the Southridge Skyhawks. During the regular season, the Beavers and the Skyhawks tied their league game 0-0. Itching for vengeance, Beaverton came out with tenacity and aggression, setting the pace for the game. The Skyhawks posed a threat, standing at the #2 seed, compared to the underdogs, the Beavers, at #15. Playing at a disadvantage, the girls’ team traveled to Southridge to take on the masses.

Within the first 15 minutes of the game, the Beavers scored three times, taking the lead 3-0. With five minutes left in the first half, the Skyhawks cut down the Beavers’ lead 3-1. Beaverton took the reigns, scoring yet another goal and prevailing against Southridge 4-1.

Defeating Southridge the previous week, the Beavers held their heads high as they made their way to West Linn to play the #10 Lions.  However, success breeds complacency, and the Beavers were defeated 1-0.

The girls’ soccer team had a season to remember. With an undefeated preseason and a handful of seniors that drove the team to success, Beaverton is proud of how the soccer team has done this season.