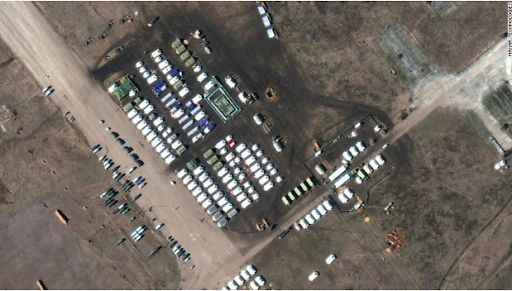 Equipment and troops at Oktyabrskoye airfield in Ukraine earlier this month.

In a briefing to the press, National Security Adviser Jake Sullivan has encouraged all Americans in Ukraine to “depart immediately.”

”We want to be crystal clear on this point. Any American in Ukraine should leave as soon as possible and in any event, in the next 24 to 48 hours,” Sullivan said.

The buildup of Russian forces on the Ukraine border is ongoing, and US Secretary of State Antony Blinken said that a Russian invasion of Ukraine “could begin at any time.” Additional forces from Russia are arriving daily, worrying NATO and the Biden administration. Multiple countries, including the UK and Israel, are urging their citizens to leave the country while they still can.

In desperation, Ukraine triggered part of an international agreement demanding that Russia “provide detailed explanations on military activities in the areas adjacent to the territory of Ukraine and in the temporarily occupied Crimea.”

This comes from the risk reduction mechanism in the Vienna Document, which members of the Organization for Security and Cooperation in Europe signed in 2011. It states that “The agreement says that “Participating States will…consult and co-operate with each other about any unusual and unscheduled activities of their military forces outside their normal peacetime locations which are militarily significant.” Russia, which signed this document, is expected to reply within 48 hours of the proclamation.

As the mobilization of Russian forces continues, the Biden administration is concerned about leaving American citizens behind in Ukraine. Hoping to avoid a repeat of the disastrous withdrawal of US forces in the Middle East, the White House approved a plan for US troops to help Americans leave Ukraine if Russia invades.

Meanwhile, the US military is analyzing Russian tank movement and monitoring Russian military units for movement from their training areas and within firing range of Ukraine. Another area of concern is cyber attacks. Russia is known for being behind crippling cyber attacks, such as those that caused the gas crisis on the east coast of the US last year. In the past, Russia has cut power in Ukraine, disrupted government websites, and stolen information.

While invasion is only one of Putin’s options regarding Ukraine, Ukraine is effectively surrounded. This build-up of forces has been startling, and according to US officials, it doesn’t seem like a military exercise. Rather, it seems to be a siege leading up to an invasion. While the Russians didn’t invade in the last Ukraine crisis, it appears that they plan to follow through on this one.