Self-love at any weight or shape 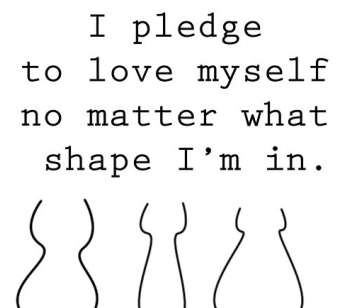 Self love focuses on healthy aspects on self confidence and empowerment of not only young women, but every gender.

In the midst of campaigns of body positivity, from companies such as Dove and Aerie, a social media tag has come to popularity. Tagged #bodypositive, the tag is filled with self-love and confidence.

The tag is used on social media platforms like Twitter and Instagram. Within these apps, communities form, one of them being the body-positive community. In the tag, people post pictures of themselves with captions like “Feeling good today,” encouraging people to embrace and love their bodies.

The tag does not escape without criticism: some of its content has been accused of being too revealing. Similar to the argument about the ban of #curvy on Instagram, that is not the point of the tag. It is to spread self-love through a bigger platform.

Anni Drechsel, a senior, does not believe the tag is too sexual. “It’s something that should be tagged with NSFW so people can block it if they don’t want to see nudity,” she said. “If they’re of age and it’s consensual, then it’s perfectly fine. It’s not just how you look in an outfit, it’s your body.”

“Some of the pictures are little much to post on social media,” said sophomore Tatum McEuen, who also noted that it’s the person’s choice whether to share the image based on their comfort level.

An argument against the tag is that it glorifies obesity, that being bigger is not something to be proud of, that it’s unhealthy. There have been articles and videos talking about it, with posters hiding behind their concerns for their health.

Recently, YouTuber Nicole Arbor posted a video called “Dear Fat People” in which she claimed that she was concerned for people’s health, saying that if it was a disease, then the video wasn’t targeted at you. Yet she shamed an obese family she saw at an airport without knowing their situation.

Sophomore Claire Arnold disagrees with this perspective. “You can be overweight but not be unhealthy and not be obese,” she said. “I think it’s kind of ridiculous. If you’re healthy and comfortable with your body, you should look however you want to look.”

Despite the disputes, the tag is a beacon for people who have struggled with their body image. Seeing someone with a body type like you while loving themselves can mean the world. The tag can offer hope for a future where they love themselves.