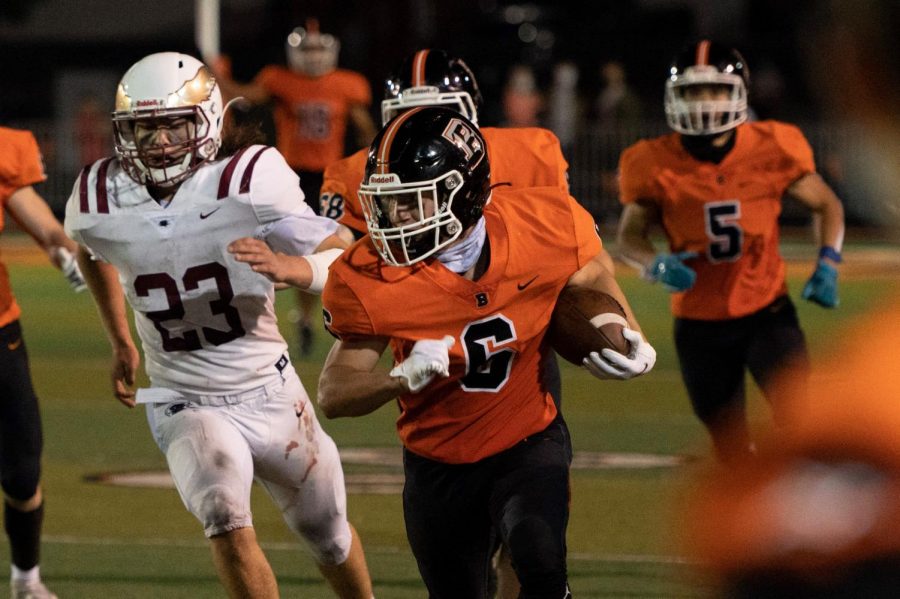 The Beaverton football stadium was packed on Friday for the annual game against Southridge. At the concessions, Bucky’s Burgers grilled their meats. On the track, the cheerleaders waved their orange and silver pom-poms. The pep band blared its music. And in the fan section were hundreds of students in black clothes supporting the Beavers. On the field, the football team geared up for their much-anticipated alumni game against the Skyhawks.

As the sun set, the Beavers started out strong with an interception and 70-yard run by Senior Kyron Albright for a pick-6 against Southridge. This was followed shortly by two touchdowns by Senior Cristian Gonzalez and two touchdowns from Southridge. The Skyhawks’ scoring was facilitated by their running backs, chiefly Cypress Albright and Jackson Powell.

“Their running backs ran hard and were hard to wrap up and tackle,” said Gonzalez. “We need to work on that for the next game.”

During halftime, the cheerleaders performed to the song “Wipeout” played by the pep band, and were met with a round of applause. Alumni and students in the audience had still more to celebrate as Dr. Erwin made an announcement over the P.A. system.

“Last spring, we had a class member from the Class of 1995 step up big time. We are so grateful for the generous donation from Scott Shleifer, a member of the Class of 1995. Scott has given us, over the next two years, a donation of 1.8 million dollars.”

The funds will pay for all class fees and ASB stickers, halve athletics fees, and allow for five times the amount of scholarship money to be awarded.

After the exciting news, the game kicked off once again, this time with more action from both teams. Seniors Hayden Eiguren and Kiri Vogelsang quickly secured seven more points for the Beavers, and with their energy running high, the team continued to score. In the fourth quarter, after a touchdown, Southridge tried a short punt to recover the ball, but it backfired and the Beavers earned another six points. With 1:40 left on the clock, Beaverton led Southridge 49-28. Being within ten yards of the goal line, the Beavers had one more opportunity to score.

“The hook and ladder play with Cristian was amazing. Everything worked out to perfection,” said junior and linebacker Tyler Budke. “Jay Keuter had a huge run to put us in the red zone. Then, Hunter Borter threw a perfectly timed pass to Cristian, who gave me a good toss, and I ran it in. Honestly, it was one of the best feelings I’ve ever had.”

As the crowd cheered, flags flew high, and the band played the fight song, the Beavers beat their rival 55-28.

The Beavers have a 2-2 overall record this season, but in the Metro League, they have been crushing their competitors with a recent 41-18 win over Aloha.

“Right now, we are about four plays away from being 4-0,” said head coach Bob Boyer. “Really proud of the guys and how they practice and play. We just have to keep getting better and take it one game at a time.”