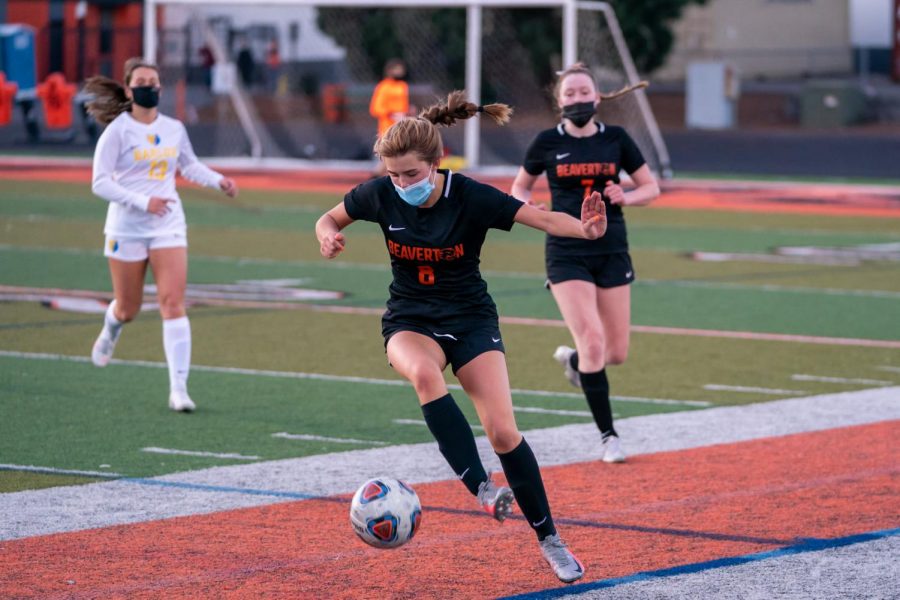 Thursday night—Girls Varsity and Junior Varsity remained undefeated in contests against Central Catholic. Varsity and JV dominated their home games against the Rams with 3-0 and 6-0 results, respectively.

The Varsity game kicked off at 7:30, and from the start, the Beavers kept the ball in their opponent’s half. They steadily built the pressure on Central Catholic until senior Emily Rice scored a goal off a cross in the 18th minute.

Going into the second half, the football team arrived to cheer on their classmates, and with their support, the Beavers dealt two blows to their opponents. Junior Roxanne Rundle shot a goal in a one-on-one situation with the keeper, and two minutes later, senior Meg Unruh scored. Central Catholic made one promising attempt on goal that was denied by goalkeeper Brielle Fernando. This solidified Beaverton’s win, and they cruised until the whistle.

Currently, girls varsity soccer is ranked 9th out of the 52 6A teams in Oregon, and the Beavers aren’t alone in their battle for the Metro League title. First, there is the undefeated Jesuit, reigning 6A State Champions for three years straight. Another contender for the title is the also undefeated Mountainside Mavericks, who have a 4-0-2 record and are ranked 7th in the state. The third threat is Sunset, who are ranked 12th in the state. Beaverton has yet to play any of these teams, but this year, they may have a better chance than before.

“I think not getting a normal season last year has really allowed us to set big goals for this next season, especially for all the seniors on the team,” said Rice. “So it’s been awesome to see the team working so hard every day and coming together to play our best.”