How it’s made: the homecoming assembly 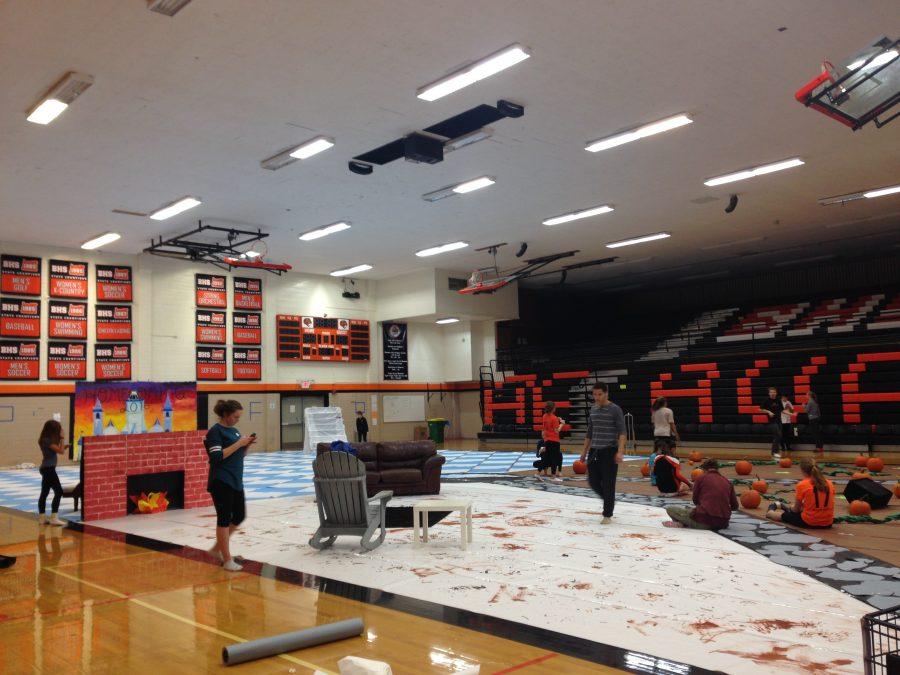 Student Leadership members preparing for the Homecoming assembly in the gym the night before.

It’s twelve o’clock, the night before the Homecoming assembly, and the members of Student Leadership are at work in the school gym. They are completing the final touches to the floor layout for the assembly scheduled for the next day, the one that we students enjoy with little regard to the amount of labor dedicated to concocting the assortment of props, the flooring, and the script. As it turns out, it’s a lot of work.

Assembling the floor the night before can easily take over six hours. “We start at around six and go until twelve, and then sometimes we even have to go the next morning,” said senior Kylee Rench, a front-runner in the setup.

Taking into account the weeks of preparation beforehand, the hours spent fabricating the assembly seem innumerable. Prior to the night before, when all of the brainstorming is brought to life, Leadership students are engrossed in developing floor plans and a script nearly a month in advance. According to Rench, in the weeks leading up to the assembly, Leadership students start writing an assembly script, the finalized version of which must be approved by administration before it can be used on the big day.

The designing process is equally complex. “For the floor, we always try and have quadrants. So this year, we wanted to bring aspects from the ball, and then from Cinderella’s house, and the garden,” said senior Anna Ricci. “We start with the basis of the paper on the ground, and then just build up from there.”

Ricci directed many of the preparations the night before, and also helped write the script. “Our theme obviously this year was Cinderella, so we so we started off with that, and then took things from the movie to build our script,” she said.

The next time we have an assembly, don’t just admire the inventive array of props that lay on the creatively designed floor. Take a moment to think about the hours of work devoted to configuring the script and engineering designs for the props.

“We always appreciate how much support we get from the school,” said Ricci.