George Floyd and Daunte Wright: How the two aren’t the same problem 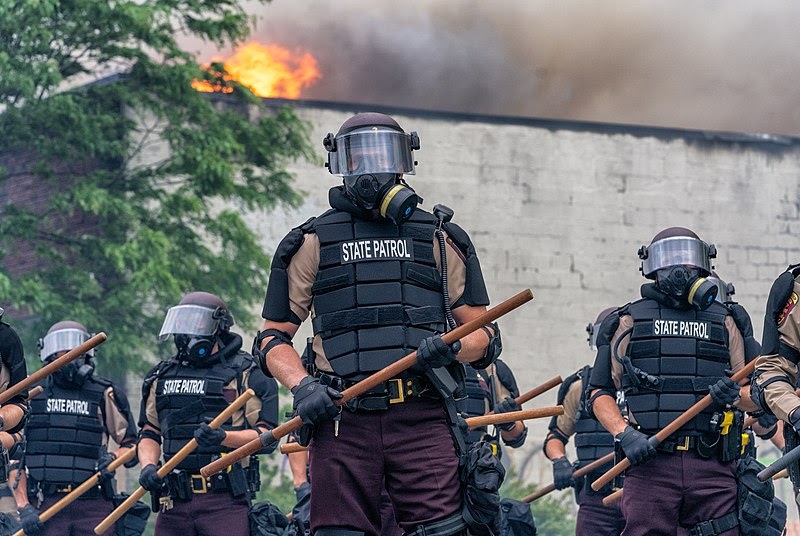 Minnesota State Patrol officers stand opposing Black Lives Matter protestors in Minneapolis after the killing of George Floyd, which has been compared to the death of Daunte Wright a year later

With the shooting of Daunte Wright, a 20-year-old Black, unarmed Minneapolis resident, people drew immediate parallels to the killing of George Floyd. Daunte Wright was killed in Brooklyn Center, not ten miles from where the Chauvin trials were being held. However, the two cases couldn’t be more different.

Daunte Wright was on his way to his brother’s house when he was pulled over by Minneapolis police for hanging air fresheners on his rearview mirror and having an expired registration on his car. When his license plate was run, police learned he had an outstanding warrant for a gross misdemeanor. Upon being told he was under arrest, he tried to get back into his car and escape. A struggle ensued, and Officer Kim Potter pulled out her pistol, a Glock 19, later claiming she thought it was her Taser. On Axon Body cam footage released to the press, Potter can be heard saying, “Do you want to get tased? Out of the car!” This was repeated before Potter said, “Taser! Taser! Taser!” When she pulled the trigger, she shot Wright instead of tasing him and cried, “Holy shit, I just shot him.” Her colleagues ask her what she means and how it happened. Officers pursued Wright for ten blocks before he died from his wounds.

Black Lives Matter protests were quick to spring up, calling Potter a murder. In my opinion, that’s not the case. By reviewing body cam footage, it is apparent that the shooting was accidental, and that Potter meant to hit Wright with her Taser. This is not like the George Floyd killing, where the killing was intentional No, this was different. This was an accident. It had nothing to do with race, or the nature of the warrants. All that happened was a mistake. We shouldn’t be arguing over if it was intentional or not. The body cam shows that it wasn’t. What we should be debating is how to improve pistol and Taser placement.

In my opinion, the Taser and the pistol should be kept further apart. Many officers I’ve seen around Beaverton have their service pistol on their waist in a holster, and a Taser on their chest, in a chest holster, visible and in different places. Further training should also be given on Taser deployment in terms of knowing exactly where to go for the Taser. Mistakes like these have happened in the past where the officer’s lethal weapon, such as a pistol, is kept where the non-lethal weapon, like a Taser, is kept, resulting in the death of a suspect.

We don’t need to discredit or insult Officer Potter. While according to the New York Times, the placement of her Taser and pistol likely “violated the protocol laid out in the manual, even if she had drawn her Taser and not her firearm,” lack of training is the issue in terms of preventing these incidents. We must find out how to fix this problem and how to prevent these accidents in the future.

George Floyd’s killing was tragic. So was the killing of Daunte Wright. However, they aren’t the same. In George Floyd’s case, the officer, Derek Chauvin, chose not to remove his knee from Floyd’s neck. The fact that he didn’t shows that it wasn’t an accident. Daunte Wright’s case, however, was accidental as Officer Potter claimed she meant to draw her Taser. But both cases are terrible nonetheless.