Students struggle through online learning: ‘We are trying so hard’ 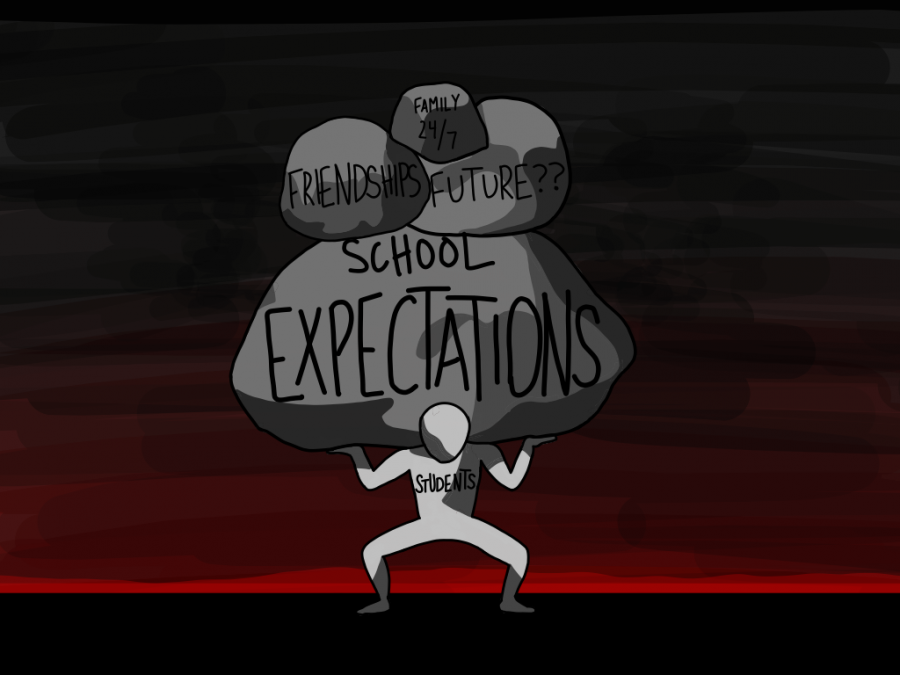 Despite the Beaverton School District’s efforts to transition to school online, students are feeling stressed and burnt out from the constant stream of academic work.

Almost eleven months have passed since the Beaverton High School community gathered together on campus. Since March 2020, students have only seen their peers and teachers through screens. Plans to return to campus have been altered or even scrapped. With COVID-19 cases rising above guidelines set by the state government at the time, the Beaverton School District (BSD) announced that schooling would happen remotely through Comprehensive Distance Learning (CDL) shortly before the school year began. On February 8th, students will begin the third quarter of the 2020-2021 school year. While it might be easy to declare CDL a success, according to students, this isn’t quite the case.

This year, the BSD adopted a new schedule in high schools called the 4×4 model to reduce the number of classes students would take at once. Instead of taking eight classes per semester, with classes alternating every other day in an A/B format, students take the same four classes daily for a quarter or two, depending on if the class was one or two semesters long in years past. This means a class meant to be spread out over a year is condensed to a semester. The District also designated Wednesdays as asynchronous, so no full-length Zoom classes may occur on those days.

But many students say that cutting down on student’s course loads in such a way may not have been the right decision. Instead of having less work to do, the assignments piled up.

“It’s hard to do all the homework that’s given. I know that we technically have the same amount of days we normally would in a regular school year, but I feel like not enough time is given for assignments. It’s especially difficult to get work done when people have jobs or family to take care of,” said senior Kyah Wright.

Wright was one of 142 respondents to an informal survey taken by students at Beaverton High School. 57.4% of respondents reported they didn’t like the current model for distance learning, with only 24.8% of respondents saying they liked it, and 17.7% falling in the middle.

Ana Cardenas, a junior at Beaverton High School, also said she was overwhelmed by the amount of schoolwork. “I got a job a while back and only lasted four days because I had so much homework every single day that I literally couldn’t keep up…and the quarter thing sucks because now we have the same amount of homework we had before, but we only have half the time to do it.”

With the same classes being every day, the time available to complete assignments is halved. The A/B schedule of a typical school year would allow for a day in between each class period to finish homework and absorb the material, but currently, this is not an option. In a time where it’s already difficult for students to adjust to online schooling, staying afloat in a stream of work with little respite leaves students exhausted. It doesn’t help that a significant portion of students reported that having the same classes every day interfered with their comprehension of the material.

“Taking notes for multiple 70-minute class periods can be very draining and an unsuccessful or ineffective teaching method,” said Tyler Shank, a senior. “When the format of the class stays the same, it can be really easy to fall into a motionless cycle. A cycle in which I don’t learn the material, don’t ask questions, procrastinate, and don’t perform well.”

When students feel as if they don’t understand the content, they may become discouraged. Receiving new homework every day with few breaks only worsens the situation.

“Not only am I already feeling burnt out, I feel as if there is no way to get ahead academically in the current system the school has in place,” said senior Cassidy Ochoa. She explained that the free time following the early completion of work present in in-person school is absent in CDL, noting it resulted in a lack of positive reinforcement for good academic behavior.

A junior who asked to remain anonymous, citing privacy concerns, said they felt similarly. “We’re children, or just barely adults: we need support and encouragement and motivation that usually came from the satisfaction of getting something right in class or the quiet encouragements from classmates complimenting an answer you said.”

Working in a non-stop environment with little payoff can cause excessive stress, fatigue, irritability, anxiety, and a myriad of other health problems. Students already exhibit some of these symptoms: 66.4% of survey respondents reported that their mental and emotional states have worsened due to online learning, with many citing the workload, the learning environment, and the lack of social interaction as main contributors.

And with classes being online this year, many students are logging in from their rooms. It makes sense—they provide privacy and quiet space to work—but with this situation comes a lack of separation between school life and home life that many people, not just students, have been enduring since the beginning of the pandemic.

“It is much more difficult because my safe space, my room, has become my source of anxiety,” said Emma Mohamed, a sophomore.

It gets worse. Students have few outlets through which to vent their frustrations: 75% of respondents said they found it difficult to make or maintain friendships through CDL. This is especially the case for students new to BHS. Sophomore Elli Brown, who enrolled at BHS this year, said she hasn’t been able to get to know anyone yet. And freshman Callum Hunter said he has trouble communicating with his teachers and socializing with his peers.

In a normal year, the first day or two of class is spent allowing classmates to get to know one another. But because the 4×4 model accelerated class pacing, the time for students to make connections was cut short or abandoned, leaving many with limited knowledge of their classmates even after a semester of daily classes.

The workload, the burnout, the dearth of socialization—it’s culminated into an amalgam of stress, exhaustion, and resentment. And even after all of this, students don’t feel as if they can complain. After all, no one wants to be in this situation—student, teacher, or administrator—but they must endure it. The problem with that mindset is that it implies that things can’t be better. It implies that it isn’t the responsibility of the school or the BSD to ensure their students receive access to an education without decimating the mental health of their students.

Granted, there are those who are doing well in online school.

Sadie Patrick, a junior, said she benefits from CDL. “My grades are the same if not a little better than previous years. I think this might be because in this environment, I feel like I have all the time in the world to just focus on my school work. It’s been really stressful keeping up with everything for me, but the stress has pushed me to stay on top of all my work, which I think has helped my overall academic success.”

Emile Bejarano, a sophomore, also expressed his appreciation for CDL. “The schedule is much better. I appreciate being home and not having to commute to school each day.”

However, these students are in the minority. Most students are suffering—in preventable ways. CDL in its current form is not a bad first attempt at online learning. But it’s just that: a first attempt; a rough draft.

“We are trying so hard,” said a sophomore who asked to remain anonymous for her own privacy. “It’s not lack of effort that’s causing bad or worse grades, it’s just that everything is so much harder. It’s harder in a way that you can’t even really communicate.”

Students want to do better academically. Right now, it’s difficult for them to achieve without having to sacrifice their mental and emotional health. And though it might seem like it’ll take effort to change the system, students have ideas for how the school can take steps forward to improve the CDL experience.

“Just taking the time to chat at the beginning or end of class makes all the difference,” said Shank. “It makes the students want to engage. It helps create some personal connection.”

Other students suggested allowing for multiple opportunities to make up work and tests, having teachers diversify their teaching methods to avoid repetition, or allowing Zoom meetings to run shorter to allow for more time to be spent on work. Still others suggested implementing mental health days or organizing Zoom sessions dedicated to watching movies or hanging out as a class.

The changes students are asking for are small, a testament to how little work it could take to help boost morale. Whatever the BSD does next, it can’t go forward without making changes. Students are tired of their issues simply being “recognized.” They want concrete actions that will allow them to have time and space to be both students, and themselves.

Fortunately for Beaverton High School students, principal Dr. Anne Erwin seems willing to adapt. “Being in CDL is making…glaringly obvious some of the gaps that existed in our system and process in school before,” she said. “It’s also giving us the opportunity to think about how we might do things differently when we come out of the pandemic.”

For students, post-pandemic change may arrive too late, but it’s a start. For now, students will continue to do what they can going into the third quarter, looking forward to the day they can return to the building. At their core, students just want to be together again.

“I am so sad that COVID happened,” sophomore Makayla Wheeler said. “I know we are doing our best to stay connected, but it’s so sad. I hope students can feel more motivated to reach out to other students during this time.”