Should we pipe down about Peeps or are they a tasty treat? 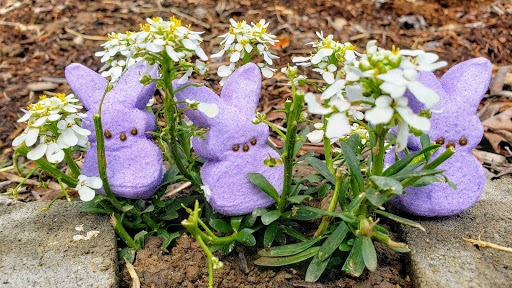 Purple bunny Peeps hide in a cluster of white flowers, hoping to avoid being eaten.

Everyone knows when Easter is near. The signs are everywhere: decorated eggs, bunny plushies, and a never-ending flow of chocolate. But one colored confection stands out among the rest: Peeps. Created in 1953, Peeps are marshmallow treats often resembling cute animals that come in a variety of flavors. Though a year-round treat, they’re most recognizable during Easter as chicks and bunnies and are a popular candy during the season. But do Peeps deserve their success?

Peeps are a quintessential Easter treat. At every Easter gathering, there’s bound to be someone bringing a box or two. Who can blame them? They’re adorable animal-shaped sugar-dipped marshmallows that leave you feeling good just looking at them. Like little balls of sunshine, they embody the fun parts of Easter.

An inarguable component of Peeps is their nostalgic value. Memories of feasting on Peeps as a child with friends a family at an Easter picnic or an egg hunt are nearly ubiquitous. Peeps aren’t just filled with sugar and goodness, but fond memories.

Peeps aren’t the only popular Easter treat. There are chocolate creme eggs, chocolate bunnies that are so big and take so long to eat that it goes stale before you can finish it, Easter-themed M&M’s, Easter-themed Reese’s, and that’s a lot of chocolate. Aside from jelly beans, there’s hardly a popular Easter candy that isn’t chocolate, and too much of it can be overwhelming—especially when packed into a single day. Peeps can be a break from a chocolate overload.

A lesser-known attribute of Peeps is that they leave room for creativity. Not only are they good for eating, but many have taken to using Peeps as an art medium. Just looking up the words “Peeps art” presents an assortment of cute flowery art pieces or elaborate sculptures and dioramas. Rarely is there a candy that allows for such a wide array of expression as this.

A Peeps diorama portrays “The Nightmare before Easter.” Image from Flickr.

But from a candy standpoint, Peeps are best classified as a disappointment. They taste like either plastic or nothing—and for the classic versions, the flavor doesn’t change with the sugar coating. They’re also messy. It’s impossible not to crust your fingers with dyed sugar when you’re painstakingly peeling the Peeps apart and chomping on them. If your hair is long enough, it can get caught in that sticky white processed fluff, otherwise known as a sorry excuse for a marshmallow. When you’re done, you’re left with a disconcerting aftertaste and a mouthful of filmy sludge.

Let’s look at the ingredients list. According to the Peeps website and some basic math, a single yellow bunny is 35 calories and weighs 10.5 grams. It boasts 8.5 grams of carbohydrates, 7.5 grams of which are sugar, and a single gram of protein. Nobody knows what the other gram is. (Probably preservatives.) In any case, a single yellow bunny Peep is 71.43% sugar. Similarly, one yellow chick has six grams of sugar—meaning that it’s also 71.43% sugar. If you’re going to have that much sugar, get it from somewhere that you’d enjoy it.

Beyond the nutrition facts, the ingredients list is far from reassuring. According to the Peeps website, a yellow chick consists of “Sugar, corn syrup, gelatin, contains less than 0.5% of the following: Yellow #5 (tartrazine), potassium sorbate (a preservative), natural flavors, carnauba wax.” Yes, what you’ve read on the internet is true: Carnauba wax is the same type of wax used in car wax. But what are they on Peeps?

Take a look at the eyes. What are they? A first guess might be chocolate, but that doesn’t seem right. A quick internet search reveals that those beady brown eyes are made of carnauba wax. Coming across them in your mouth is about as fantastic as finding a bone in banana bread: it’s disturbing, nasty, and suspicious.

Admittedly, nobody expects candy to be healthy. But there’s candy out there that’s slightly healthier and tastes better than these insults to marshmallowkind. And just because you’re sick of Peeps doesn’t mean there aren’t alternatives. Haribo makes Easter gummies. There are Mike and Ikes for Easter. And of course, there are jelly beans: a non-chocolate Easter staple that has variety, unlike Peeps. Don’t like one flavor? Try another! You aren’t stuck with the same taste no matter what the color.

It turns out that many Peep-eaters enjoy having these monstrosities stale. But stale Peeps are closer to a step sideways than a step forward. They might be less gooey and messy, but with a stale Peep, you’re left with a gritty cross between a stick of gum and a Hi-Chew.

While Peeps may have nostalgic value, it’s about as great as that of Elmer’s school glue. You know, the stuff that would take forever to dry, leaving your construction paper project in danger of collapsing, and that you’d cover your hands with to peel off “glue film” to entertain yourself. Like Elmer’s glue, Peeps are better left in the past.

The artistic and decorative value of Peeps is hardly an improvement. Though many consumers have taken to creating dioramas with Peeps, the reality is that Peeps look squished, hastily manufactured, and shapeless. Perhaps the best use of these marshmallow frauds is “Peep jousting.” Two Peeps are impaled with a toothpick each and are placed in the microwave, lances at the ready, to joust. The microwave turns on, and the Peeps rotate. Slowly, they inflate, their lances coming near until one falls over, is impaled, or is pushed off of the plate.

Whether through Peep jousting or overloading the market, Peeps are leading themselves to their own demise. They’re no longer limited to Easter—they’re available year-round and have ventured into the worlds of Peeps milk, plushies, clothes, books, Christmas ornaments, and stickers. Some people even put Peeps on cheese pizza to make a “Peepza.” The Peep craze has gone too far. It’s time to stop eating Peeps.

Yes, Peeps are nostalgic marshmallow creatures, but at what cost? The ingredient list leaves much to be desired, but Peep-eaters know they’re having candy—they don’t expect health benefits. Aside from that, does emotional attachment to Peeps outweigh the negatives? It depends on who you ask, but when you pick a side, be ready to defend it as the debate continues.