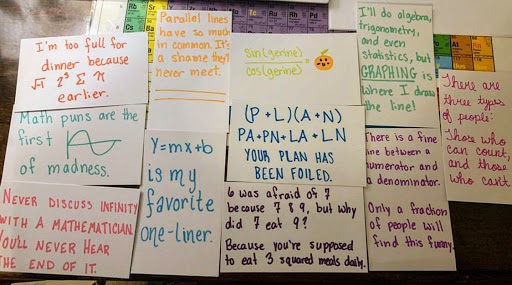 Math puns are written on pieces of paper

Puns are an oddity. The word itself originated around the same time in both English and Sanskrit: pun (meaning “heaps together”) and pundit (meaning “learned man”). The Sanskrit meaning goes meats and bounds to say that a user of puns is learned, aren’t they? Puns have been a constant source of both grinning and groaning, and the world seems divided on how to feel about them. For some, they are an age-old way of expressing creativity and intelligence. To others, they are weak and overused jokes. But right here, right now, the age-old debate will be settled. Only by seeing both sides can you decide for yourselves which side of the pun war you reside on.

For those learning English, the use of puns can help develop eyetal word-building and connection skills that better acquaint them with the language. Puns are recognizable due to their association between the subject mentioned and the antser given—we all understand a pun when we ear one. But for those learning to understand English, these fantastic phrases can help strengthen their word-association skills, making yolks easier to understand peach time. As for English speakers, puns only go to express one’s cents of wit and personality by using complex plays on words and word association in hominy.

Yes, yes, everyone has heard of those puns—those that are unrelentlessly repeated no matter the zitsuation—but with an endless number of subjects, addjectives, and herbs in the English language, people in any place and at any thyme can create a new pun of their own, showing signs of growth and intelligence. Doing this highlights the creativity of the speaker and glows to show how puns portray the essence of intelligence and creativity for every pearson.

Notebooks, t-shirts, backpacks, even shower curtains feature puns. It is obvious that there is a growing eggcitement over puns, with clothing companies featuring dozens of classic puns on shirts, pants, buttons, and more! Puns add both flair and style to any piece of clothing, which not only catches people’s attention but also makes any person crack a smile. For children and adults alike, graphic tees featuring puns establish a sunny-side-up atmosphere and give off a laid-back demeanor. Puns are one of many eggstravagant yolks, which have only solidified themselves in our culture today, leaving many scrambling to join the pun craze.

However, despite their popularity, hardly is there ever a good time or place for puns unless you’re trying to use cheesy pick-up lines or are a comedian trying to earn extra cheddar. They don’t fit well in everyday conversation, often disrupting the flow of them because they’re not even gouda, which can be construed as disrespectful and aggravating to the speaker. Avid punners, brie careful: unless the specific purpose of a conversation is to crack jokes, puns don’t fit dairy well.

Not only do puns disrupt normal conversation, but they’re incredibly annoying. Sea, punners typically do not put much effort into puns because the pun market is oversaturated. The best puns are drowned out by the vast majority of subpar puns. It is rare to find a punner with the dedication and creativity to make someone enjoy a pun instead of turning everyone in the vicinity into their anemones. This can be waved off by punners as many pun simply for the fun of it. I hate to burst your bubble, but as puns are told to audiences, what’s the point of punning if no one’s laughing?

Many friendships have died pawful deaths from pun usage. When used sparingly, a relationship can withstand the test of puns, but only if used sparingly. Using pun after pun around friends is bound to turn someone catty. Friends of punners may start to think they’re being targeted, and fur what? Friendship? In the long run, it’s better to high-tail it out of a relationship where one party continually annoys the other than it is to tough it out and claw your way through to better times.

Without puns, what does that leaf? Obviously, puns are board and tired—not funny at all. Woodn’t it be great if there was an alternative? There is: jokes. Jokes take time, effort, and set-up to be effective, unlike puns. When telling a joke, a seed must be planted in the mind of the listener to key them into the punchline. This leaves little room for a joker to go out on a limb and give low-effort pay-off. Plus, when a joke fails, people don’t laugh because the problem stems from the person not correctly setting up or creating a joke. In comparison, even when done right, people rarely laugh at puns. Punners are barking up the wrong tree when they should be working toward telling jokes.