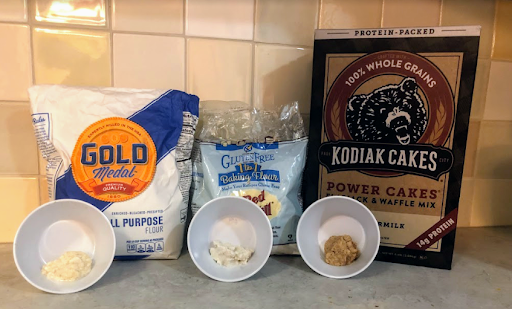 Several types of flour have been reduced to gluten by washing out the starches with water.

Baking. Many people think of it as just another way to cook, but with baking, there’s so much more science at play. That bread in the oven rises for a reason. That cake batter solidifies for a reason. Those muffins turn golden brown for a reason. The common ingredient in these is flour, which is the building block for baked goods to puff up to that perfect texture.

Flour is a fine powder made by grinding raw grains, nuts, beans, or seeds. Wheat powder, the most common kind, contains a protein called gluten. Many people have heard of this in reference to gluten-free products, but many are unaware of the crucial role it plays in flour and baking.

If you’ve ever tried your hand at making bread, chances are you used a leavening agent—the ingredient that causes bread to rise—such as baking soda or yeast. These ingredients react and produce carbon dioxide bubbles in the dough, and you can see this process by setting aside dough and coming back later to see that it has risen.

Baking soda or yeast makes air pockets that give bread its signature texture, and gluten makes this possible. Gluten consists of two proteins called glutenin and gliadin. When mixed with water in the dough-making process, they form gluten. As the dough is kneaded, gluten molecules stretch, trapping tiny bubbles of carbon dioxide throughout.

When baking, it is important to use the right kind of flour so your baked goods come out at the density and texture that you want them to. Most baked goods can be made with all-purpose flour because it has a protein content of around 10-12%, suitable for most cakes, muffins, and certain types of bread. For heartier bread, using bread flour, which has a higher protein content (generally 12-15%) yields the best results. The protein percentage represents how much gluten is in the flour and therefore how much it will stretch as the dough is kneaded or the batter is mixed.

But what about gluten-free flour? Many other substitutes exist that have other types of proteins. Rice flour’s protein is rice protein, which acts similarly to gluten in the baking process. The texture of a gluten-free product is never the same as products with gluten because gluten’s process is unique and is difficult to replicate with other proteins.

Whatever your need for flour may be, now you know the reason why it causes baked goods to keep their shape. Gluten and leavening agents work together to bring that perfect texture to the table—that is unless you over or under mix it. Regardless, don’t be afraid to experiment with new types of flour or different amounts of mixing. Baking is all about trial and error until it comes out just right!