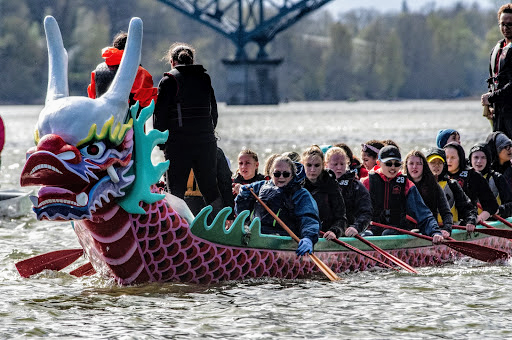 Our world is facing an unprecedented pandemic, one that will be remembered for generations to come. But the pandemic has done more than infect hundreds of thousands. It’s been responsible for millions of local events, clubs, performances, and practices to be canceled indefinitely. Cancellations have hit the Beaverton community hard have been these cancellations, especially for BHS’ Dragon Boat team, the Dam Beavers.

Dragon Boat is a team sport where students row together on the Willamette to compete against over 60 different teams in the Portland Rose Festival in a boat with the head and tail of a dragon. This year’s season was just starting when the announcement came that school would close.

The Dam Beavers are a tight-knit group, many of which were recruited by their friends. “I wouldn’t have joined if it wasn’t for my friends peer pressuring me—in a good way!—but it was worth it,” explained team captain Nathan Quandt.

The paddlers enjoy being a part of something bigger than themselves, but unfortunately, now that the season has been canceled, they can no longer practice together. Several paddlers had expected the season to be canceled as the effects of the novel coronavirus rippled across the community, but frustration and disappointment remained.

“I was irritated because I only got to do three years of this and now it has been cut down to two,” said junior Misato Fukui. “I felt bad for the seniors in general who didn’t get to do their final year of paddling.”

Another paddler, captain Sydnee Smith, couldn’t help but express her longing to be out on the river rather than being stuck at home. “Especially with the nice weather we’ve been having, I’ve wanted to go out on the river more than once,” said Smith. “It’s been really tough with the quarantine, and it would be nice to spend some time with the team but I can’t so it’s pretty sad.”

Even River Rain, one of the team’s newest recruits, felt robbed after waiting for so many months to paddle. “When I found out the season was canceled I realized I’m only going to have one more year to do this. If only the virus could have held off for six more weeks. I was disappointed since I’d been looking forward to this all year. I still have my lifejacket in the corner of my room, looking sad.”

Each paddler is navigating a wide range of emotions due to the season’s cancellation, and many noted that they missed getting in touch with nature, their friends, and the concept of exercise. 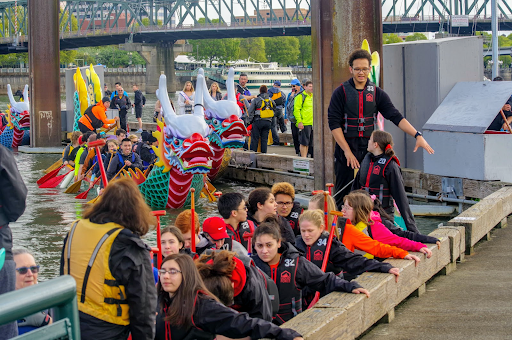 The Dam Beavers sit in their boat by the dock. Photo from the Beaverton High School Dragon Boat team.

In a world that constantly adapts to a changing global environment, the paddlers won’t return to normal life after the coronavirus pandemic dies down. The world the paddlers will return to after the pandemic will not be the same as the one they left behind. The threat of viral diseases will take center stage in the minds of business owners, politicians, and citizens across the country. These changes will be on a national scale, but also on a local level.

The biggest issue with Dragon Boat is that paddlers are crammed into a small space with little room, well below the space required to practice safe social distancing. Though raised concerns among paddlers, many had solutions. Captains Smith and Quandt focused on hygiene, suggesting that lifejackets be assigned to a member for the duration of the season and washed regularly, or that paddlers should wear gloves during practice. Fukui also suggested adding space between paddlers by having empty benches between them or splitting the team into two boats, but noted that the latter would be difficult due to a lack of manpower guiding each heavy boat down the river.

Despite these challenges, Rain remains optimistic about the seasons to come. “I think the team will be invigorated since many people will be going on their final year of paddling, and I think that will be a strong motivator that will come into play.”

Though the paddlers miss the river, the boat, nature, and each other, they look forward to the next season on the horizon. For better or for worse, the world after the coronavirus pandemic will not be the same as before. But someday, BHS’ own Dam Beavers will make a splash once again on the Willamette.