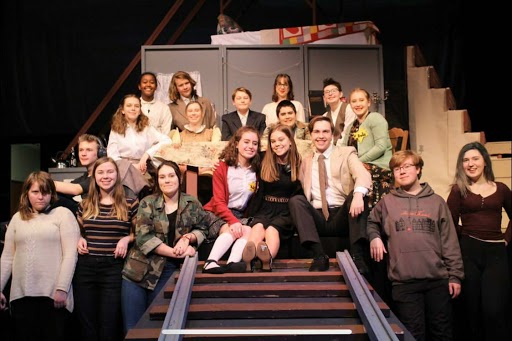 The cast and crew of BHS’ recent production of Anne Frank pose onstage. Mlodinoff, who played Anne Frank, will serve as a State Thespian Officer this coming year.

Beaverton sophomore Serena Mlodinoff has spent over a decade in the world of theatre, enthralled by its magic and community. Now, having been recently elected a State Thespian Officer (STO), she will spread her enthusiasm throughout Oregon for the 2020-2021 academic year.

Up until this year, Mlodinoff didn’t know what an STO was but wanted to be one as soon as she heard about the position. STO’s are tasked with helping lead theatre-related events and serve as student representatives. They also must attend up to five Board meetings per year and major Oregon Thespians events such as Camp Thespis and Instant Theatre. Candidates must be inducted members of the International Thespian Society.

Typically, STO’s are elected at state festivals. But circumstances changed this year, and results were posted on the Oregon Thespians Instagram page. Mlodinoff is one of seven new members of the State Thespian Officer Board.

“I honestly couldn’t believe it, especially since I’m a sophomore and most of the people who were running were juniors,” Mlodinoff said.

The core of Mlodinoff’s campaign was to raise awareness of various issues through theatre, and her role as Anne Frank last year helped her recognize theatre’s power to educate audiences. That was all it took to focus her campaign.

“I want to use our energy as Oregon thespians to educate our communities through theatre,” Mlodinoff said in her candidate speech, listing issues such as LGBTQ+ rights, gun violence, and Holocaust remembrance. “Anne Frank inspired generations, and I believe that the Oregon thespians can, too, if we work together.”

Mlodinoff has big plans for the coming year. As an STO, her primary goal is to help connect Oregon’s 86 thespian troupes by encouraging them to educate their audiences through theatre.

“Whether the troupes choose a whole production, or a pantomime, or even a speech at an assembly, I would like the Oregon Thespians to show that theatre means more to them than just acting,” said Mlodinoff.