The Odd Couple is a resounding comedic success 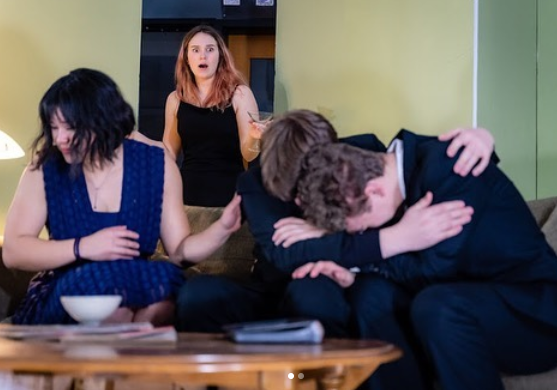 Actors in The Odd Couple share an emotional moment.

At Beaverton High School, Valentine’s Day is full of romance and intrusive yet entertaining Val-a-grams. While many people sobbed about being single or went on a date, we spent the evening watching The Odd Couple.

Directed by Romie Aviv Stuhl, The Odd Couple is a play by Neil Simon about two friends who end up living together. One friend—Olive Madison—is a slob, and the other—Florence Unger—is a recently divorced, emotional neat freak with countless perceived medical problems. Throw in two sexy Spanish guys with a terrible understanding of the English language, and you’ve got yourself one heck of a play.

Of course, the fire was a huge hindrance. “Our main issues were our rehearsal space because our studio theater and our auditorium were completely taken away because of the fire,” Quaye Dydasco, who played Florence Unger, said. Instead, the cast rehearsed in the computer lab and the MD Lecture Hall, and performed in the choir room.

The challenges didn’t stop with the rehearsal area, though: “We had had an entire set built before the fire even happened, and none of that got damaged…but the whole area was blocked off, so it was difficult to get anything,” Dydasco said. Access to costumes and equipment were limited, and lights had to be borrowed from teacher Emily Lux for the play to go on.

Despite these obstacles, the play is as good as it gets. The jokes and quips are constant, leaving the audience laughing at every turn. Yes, the play is corny, but audience members can relate to it if they’ve shared a living space before.

A particular attention-catching line was when Florence shouted that the only single man that would take her was Jason Sarmiento—a beloved staff member at BHS—prompting uproarious laughter from the audience. While this line was not in the original script, it was an awesome nod to BHS.

Not only was the play enjoyable for the audience, it was also fun for the cast and crew. “You really get to know these people,” Dydasco said. “It’s a great bonding moment.”

The BHS drama department overcame countless roadblocks to put on a spectacular, side-splitting show. With a track record of incredible talent, everyone should see the next couple shows the program will offer.