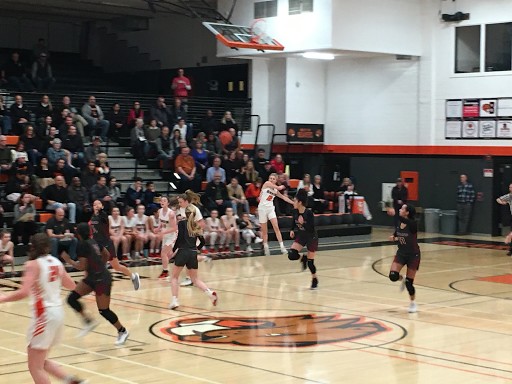 Beaverton player Mary Kay Naro hurls the ball across the court to her teammates.

After a heated game against Southridge on February 4, this year’s BHS girls varsity basketball team remains undefeated in the Metro League.

Even during the first couple minutes of the game, the rivalry between the two teams was clear. Players shot under the basket to catch the ball, sprinted across the court, and even shoved each other out of the way (usually unintentionally) to score points. The gym rang with the referee’s whistles, often with seconds left on the clock, and penalty shots were abundant. Adding to the nail-biting atmosphere was the tiny gap in scores as the game progressed: The first quarter ended with Beaverton only five points ahead.

Southridge’s solid base of supporters did little to lift the morale, but Beaverton supporters and varsity team members countered it with their own enthusiastic cheering, rising to their feet whenever a goal was scored. Beaverton Coach Kathy Adelman Naro was equally fired up, shouting out advice to players during particularly tough sports.

This eventful game was also the first in a while that the pep band attended. Having been ousted from the band room by the fire, the band was unable to access their instruments or rehearse for two weeks, and their absence was perhaps most noticeable at this year’s Jam the Dam game. Despite this setback, they performed well, especially considering the last-minute nature of the event: The band room had opened to all classes that very day.

While the band and student section added to the hype, the players on the court fought hard. By halftime, the score was 28-14. This gap remained consistent to the end, with a final score of Beaverton 55 to Southridge 44.

Regardless of the penalties, body-slamming, and abundant support for the opposition, the Beaverton varsity girls pulled through to a satisfying win for Beaverton High School.