Why you should join wrestling this year 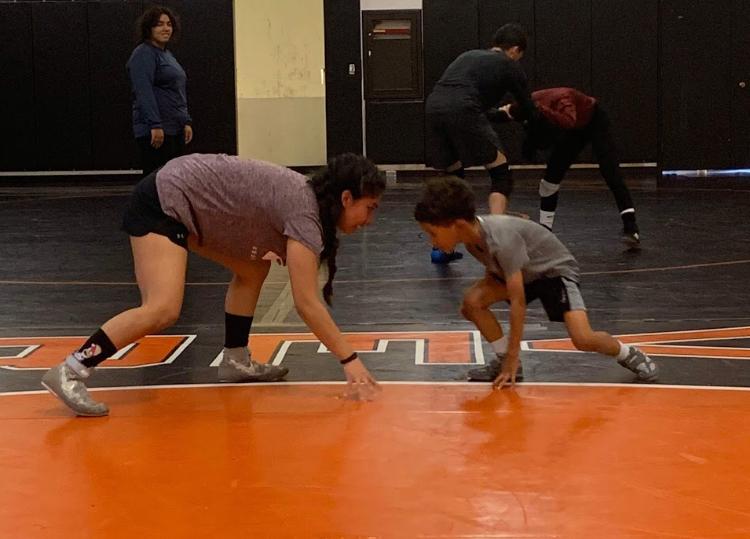 Wrestler Sylvia Almaguer faces off with an opponent

Everyone has their own opinion on what sport is the hardest. Some say football: you have to tackle people, defend a ball, and fight to the end zone. Others say it’s dance or figure skating because of the sheer amount of self-discipline and work that must be put into the sport. But if you ask me, the hardest sport in the world is wrestling.

The strongest wrestlers are female, and that’s what I am: a female wrestler. I have to work as hard as the guys, sometimes harder. I have won and lost—my record for the past three years is 32 wins and 8 losses.

I have cried, screamed, and laughed. I have felt every emotion in two brief minutes, but not once have I put my head down. I never have given up; I have fought hard to be where I am today. Through blood, sweat, and tears, I’ve never rolled over and backed out—I made those eight people work for their wins.

This will be my fourth year of wrestling, and as the first female wrestler in my family, I am proud. Wrestling is not just a sport—it’s a lifestyle. It teaches you that when you get knocked down, you come back ten times harder.

When I’m in a match and I make a mistake, there’s no time to get frustrated. I have to recollect myself in seconds. If I ever get on my back, my coaches won’t tell me to breathe and keep calm—if they did, I wouldn’t be as tough as I am today. Instead, they scream until their lungs are out of air and tell me to fight like my life depends on it.

Everyone always hears about the bad parts of wrestling, like cutting weight, intense work-out sessions, and having to wrestle one-on-one. But coaches will never ask you to cut weight. At most, they will recommend that you not to eat until weigh-ins, meaning that you would only miss a maximum of two meals. And the work-outs are worth it. They begin with stretches, are followed by a work-out, and then practice. Sometimes, for tournaments, we wake up at five A.M and stay there for twelve hours or longer, depending on the tournament.

Wrestling has a lot of benefits. I’ve made great memories with my teammates, and the feeling wrestling gives me is incomparable. “Wrestlers compete as individuals yet the sport builds camaraderie like no other,” said Cael Sanderson, the current head coach of the Pennsylvania State University wrestling team.

I encourage anyone interested in wrestling to come to youth practices Mondays-Thursday at 5:30-7:30 P.M. The wrestling season starts on November 18. Wrestling is an excellent, character-building experience that will give you memories sure to last you a lifetime.