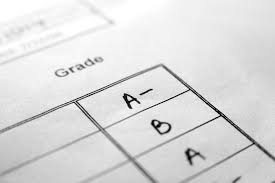 The grading system in the Beaverton School District has raised controversy over the years. It's time for it to go.

Grading day. After a week of exhausting finals, grades pour in, and students start to wonder: “What did I get on that math test? How will it affect my grade? How will my teacher grade my work and average the scores?” All of these questions and more run through students’ minds on days like these, and to a lesser extent, throughout the school year. Of course, this is exhausting and degrading to students’ self-esteem, and you might be wondering what’s causing all the stress.

The current grading system is a proficiency-based scale of 1-4. With only four categories for students to fall into, this system is lacking. It only gives students a score of either 25%, 50%, 75% or 100%. Four possible scores…that’s it.

Grades are important, sure, but when high schoolers put so much effort into cramming their work into the mold of a rubric, learning is adversely affected.

“There are a lot of things that have become so content-driven that we lose some of the soft skill pieces that are important in life—things like meeting deadlines, things like prioritizing certain things, making those sacrifices, making those choices…you lose that personal responsibility piece,” said math teacher Jason Sarmiento, who has been teaching for seventeen years and has experienced both percent grading and proficiency-based grading.

These “soft-skills” also include responsibility, communication, and leadership, ideal qualities to any future employer or college admissions board—and they are rarely emphasized by the proficiency system. This system puts more of a focus on individual behavior scores rather than group projects, public speaking, or leadership roles in the classroom.

“The message that ‘Effort leads to success’ is being lost in proficiency grading, and we’re definitely seeing that in our classes,” math teacher Jennifer Weber said.

Depending on the conversions teachers use to apply student work to the proficiency scale, a 90% could mean a 3, a B average. This gives an unfair advantage to other schools that use percent grading, which better reflects the effort put into students’ work instead of how well they meet the guidelines of a rubric.

This disadvantage was made clear when Deering High School in Maine transitioned from percent grading to proficiency-based grading. In an article written by The Hechinger Report, a DHS student said, “I shoot for A’s on all my work, but a lot of teachers don’t give you an option to go above and beyond.”

This lack of motivation is a consequence of the system: It doesn’t offer challenges, and it traps struggling students.

These unfair circumstances even pertain to those who support the system. “This system is designed to allow high-achieving students to progress more rapidly through the curriculum, and ensure that all students reach a certain lower bound of proficiency,” says an article from Getting Smart praising the proficiency system.

This displays the idea that struggling students are presented with unequal circumstances while “easy A” students cruise through the system. This makes it easier for students to either get great grades or fail, leaving little room for mediocrity.

A similar system in our district is 1-8 proficiency grading, which is often used at MYP middle school level and is identical to the 1-4 system except there are two possible grades for each proficiency level, and an A is equivalent to a 6.0 average. However, the International School of Beaverton (ISB) also uses this system at the high school level.

“I think the numbers are confusing,” said ISB parent Suzette Kennedy. “I would prefer percentages, not zero through eight. I don’t understand why they use that scale—the reasoning doesn’t make sense.”

As a parent, involvement in students’ education can be challenging, and with confusion about the grading system, which administrators have repeatedly failed to explain, understanding why a student receives their specific grades can be a struggle.

While the proficiency system may present some benefits, overall the Beaverton School District grading system is detrimental to student success. Were we to switch over to the percent grading system, students would see less restrictions, higher-quality learning, and space for creativity without the mold of a rubric. And while this is likely not a change that will be implemented, it is still important to note the differences to decide what is best for students, no matter the scenario.