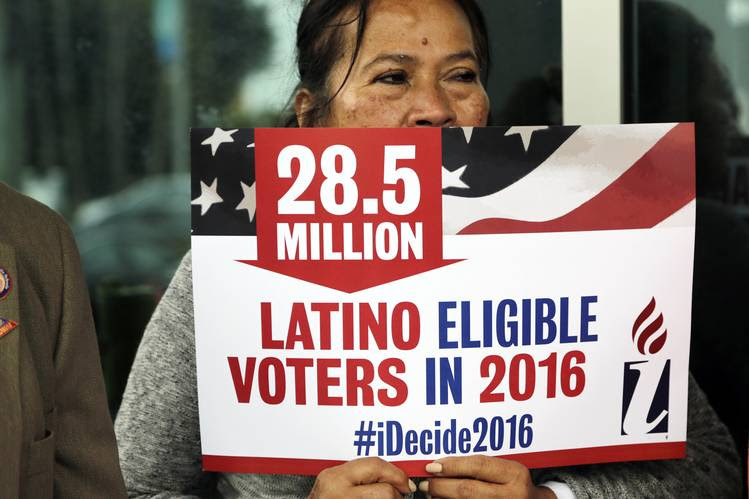 A Latinx person holds a sign, encouraging Latinos to vote.

The 2020 presidential vote is approaching, and as Trump crusades on his “Keep America Great” campaign, the competition grows: 18 Democrats have declared they are running. While Trump continues to fight illegal immigration from Central America with a wall, Hispanic Democrats are encouraging the Hispanic voting population to vote, and to vote blue.

Latinos are one of the most persecuted ethnic groups in the United States. By insulting Central American countries, showing no support for Puerto Rico after Hurricane Maria, treating illegal American immigrants inhumanely, and forcing Mexico to pay for a wall that they don’t want, President Trump has enraged one of the fastest-growing ethnic constituencies in the United States. Their vote is essential to getting Trump out of office. But voter turnout is low: as a group, Latinos have been oppressed to the point of no hope.

According to a Pew report in October of 2018, three-quarters of Latino Americans believe the wall should not be built, yet a quarter of all Latino Americans believe there are too many immigrants. In 1986, the Latino voter turnout was 2.9 million ballots, and in 2014, it was 6.8 million. Although there was an increase in votes, the percentage of voters fell from  38.7% to 27.1%. If the 2014 turnout rate stayed constant with the 1986 rate, Latino votes would have summed up to 9.7 million ballots.

We need to treat this lack of Latino political participation like the Democrats treated the lack of Black American voting in the Civil Rights Era: with freedom rides and the Freedom Summer of 1964. Through his hate speech, Trump has reversed the narrative the Civil Rights movement fought for. Latinos need to be reminded that they are equal and that their voice is heard by the progressive population of this country. If new leadership is installed, Latinos and the other minority groups of this country can be acknowledged nationally.

Beaverton High School has a large population of future Latino voters, such as senior Luis Cabanilla, who plans to vote for a Democratic candidate in the 2020 election. “I always wanted to vote since my mom is undocumented. For me, it has always been, ‘What is the best way that I can help my through voting?’”

Luis, like many students at Beaverton, is affected personally by the President’s insensitive comments.

Dylan Garcia, senior and leader in MEChA and Multicultural Student Union, also will vote Democrat. He is unsure his fellow Latinos will do the same. “They [Latinos] already feel they don’t have a voice now, so they are probably thinking, ‘Why would I want to vote? My voice already isn’t heard.’”

As a community, we need to encourage young minorities to vote and replace conservative representation with progression.  The Latino vote matters more than ever. Standing up now and removing a negative, racist President from office will bring a larger sense of hope to the United States. Trump’s racist, sexist, homophobic rhetoric is fueled by the power of the presidency. If we push him off the throne, we as a democracy can get back to improving our country.