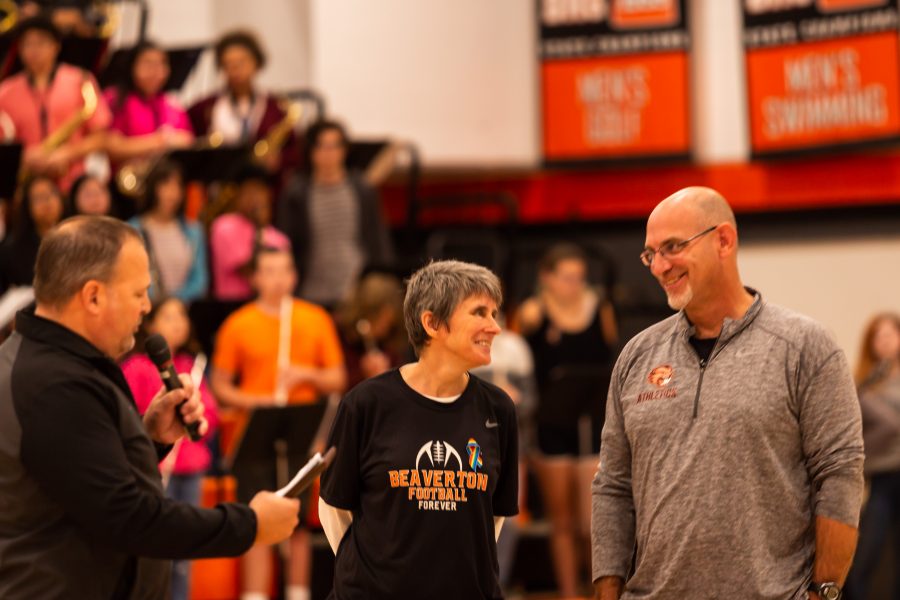 Coach Boyer receives his award at the homecoming assembly.

Boyer’s 100th successful game at Beaverton High was against West Salem on September 28th, 2018. The Beavers were ahead 28-6 in the first half, but West Salem fought back. Though competition was fierce, the Beavers came out victorious 35-33.

Coach Boyer’s memorable wins with the Beaverton High School program included the state championship game in 1999 and beating West Linn High School in 1992. “Comeback win a couple years ago against Southridge, we were down 23-0 and we came back and won 26-23, and the game this year against Westview was a really good feeling,” said Boyer.

It seems that players love Coach Boyer. “Boyer is really trying to make us better people while also making you a better football player at the same time,” said sophomore Gabe Sheaffer. “In practice, he doesn’t miss a chance to teach us a life lesson to improve our character. I think he believes if our team has good character we will do well as far as football games go as well.”

Boyer’s coaching style is inspired by figures in his past. “I would say Faustin Riley, who was really the first head coach that I worked with here at Beaverton High School, Ron James, my high school wrestling coach…I mean, there are so many,” Boyer said. “Jim Archer, who was our track coach, who I actually first started working with, all these coaches and how they dealt with kids, and how they ran their programs, and their values have all had an effect on me and the way I coach.”