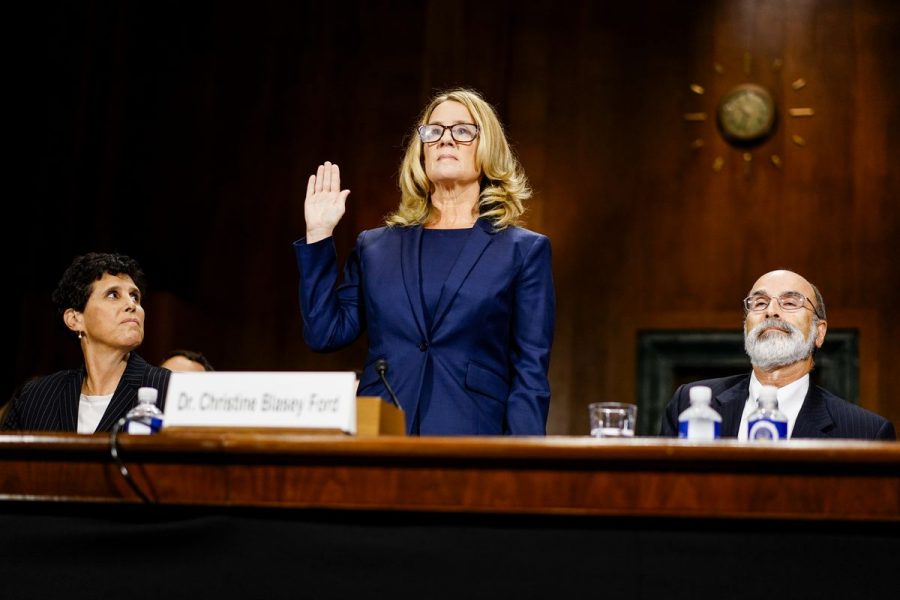 Dr. Christine Blasey Ford is sworn in before her testimony against Judge Brett Kavanaugh

She tucked her hair behind her ear. She shakily spoke to a room of strangers. She stammered through her story as strangers assessed. She cried, but she continued. She stood and she swore. She suffered for more than thirty years in silence, and now we mock her strength?

Dr. Christine Blasey Ford testified last Thursday, September 28th, accusing supreme court nominee, Brett Kavanaugh, of sexual assault when they were in high school. Her allegations have been met with scrutiny being described as an “unethical sham” by Senator Lindsey Graham and even being ridiculed by the President of the United States. The backlash that Dr. Ford is facing in light of her testimony – the fact that an “I Believe Her” movement even exists, creates doubt in not only Ford’s testimony but every woman’s. If people must say that they believe someone, it means that other people don’t.

Instead of being an example for women and girls to speak their truth, the speculation and media frenzy of Dr. Ford’s testimony is what makes other women, especially young girls, afraid. Spectators question her credibility since she can’t remember every detail and in turn, discredit her pain and praise the perpetrator. With multiple allegations held against his name, why is her name slandered more than his?

Women all over the world, just like Dr. Ford, are consistently blamed for sexual assault and it starts at a young age. It starts in elementary school where dress codes specifically target girls rather than boys and it continues through their youth. Women and girls alike are warned, “don’t go out alone”, “don’t dress provocatively”, and “bring mace with you.” While men are never told to do so. Women are constantly told, “don’t put yourself in that situation.” What situation? The situation where we could get hurt, where we could get assaulted or raped? Since when is this our problem? The “situation”, that girls are told not to get themselves into, are at the hands of those who don’t believe us when they happen.

This is why girls don’t testify until so late. They don’t understand what to do in the moment, they’re told to not get in this situation and when they do, they’re predisposed to feel guilty.

High school is a scary place, there are people as young as fourteen and as old as eighteen (with a few exceptions) coexisting, which is uncomfortable in of itself. Dr. Ford was only fifteen when she was sexually assaulted, a sophomore at most. There are at least four hundred sophomores at Beaverton high school and sex isn’t new to students.

Just recently, students at Madison High School participated in a sit-in and walk out this past Tuesday, October 2nd, in protest of a wrongly handled sexual assault at their school. This proves that occurrences like this aren’t a one time thing, this didn’t just happen to Ford. It happens to hundreds of girls.

These experiences are traumatic and have long lasting impacts on the victims. There is no way a woman would say she got assaulted when everyone recoils when they hear the word “tampon.” Girls are so apprehensive to speak up about their problems, it’s simply a social norm that they don’t discuss them whatsoever. There’s not only shame that comes about when girls tell people something that happens to them, but it’s also the judgement. And so often, it’s not the judgement from the public or people they don’t know. That’s why so many people are so open to therapists – that’s why they exist. It’s the people closest to us that we’re afraid of telling.

Any child doesn’t want to disappoint their parents, but we’re setting up our children, especially our girls, for failure. Parents, you don’t want your children to keep secrets? Tell them what to do when they get in a bad situation, don’t tell them to not get in one to begin with. We’re afraid that our own best friends and mothers are going to be disappointed in us, they expect more out of us when really it’s not our fault.

I can attest to this myself. Don’t you think I would’ve stopped him if I could? The first thought that came to my mind when he touched me was, “I shouldn’t be here.” Once I was in that position, I no longer had any control. I had never been told how to react when you’re already in the “bad situation.” All I wanted was for it to be over, it felt as if all I could do was wait at that point. Sexual assault is not our fault yet many girls like myself are programmed to think in such a way.

At the end of the day, it’s a choice to come forward. I have chosen to move on about my experiences, it wasn’t until this hearing came about that I even remembered. When something traumatic happens to you, people cope differently- some let it haunt their every movement, some choose to confront the demon, and some choose to move on. I chose to move on, like Ford, I was only fifteen years old. I didn’t know what was happening to me, I didn’t know how to react in the moment. All you want to do is go home and like Ford, I can’t remember if I walked home or if I got a ride. But one thing is true: a woman knows what happened to her, and she’ll never forget it.