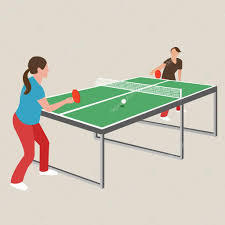 Beaverton High School has been known in the past to have a wide variety of clubs and activities that students can get involved in. Whether it be the Black Student Union or the Board Game club, there has always been great diversity among BHS activities.

This year, several new clubs have been introduced to the community, one of which being the Ping Pong club. This unique activity sparked interest in over 100 students at the BHS club fair, and was founded by Luke Rien, a P.E. teacher at Beaverton.

“A few students came up to me several weeks ago with an interest in playing ping pong outside of school hours,” said Rien. “And, anytime someone comes to me and wants to do something active, I’m all about it.” Though they have not had any sessions yet, Rien said he can tell that this club will be “incredibly exciting.”

Another new club at BHS this year is the Jewish Student Union. Isaac Rosenthal, a senior with Jewish heritage, decided to create the club for other students interested in the culture. Similar to BSU, it is a group for Jewish and non-Jewish students to come together and celebrate Judaism. With a similarly impressive turnout at the club fair, JSU has around thirty participants and is excited to have their first meeting this fall.

With such a variety of clubs, it can be hard to pick just one to be a part of. If you’re interested in painting like Bob Ross, join them Tuesdays at 4:00 p.m in the drama room. If you debating with other students, check out the Speech and Debate club hosted by Kristine Igawa on Mondays and Thursdays at 2:45 in room 110. If you want to be a part of the Gay-Straight Alliance, check it out on Tuesdays at 2:45-3:30.

Beaverton High School has over fifty clubs that any student can be a part of. It’s important to be involved with your community, so make sure you try to attend a session or two of your favorite one! For more information on other clubs to join, click here.