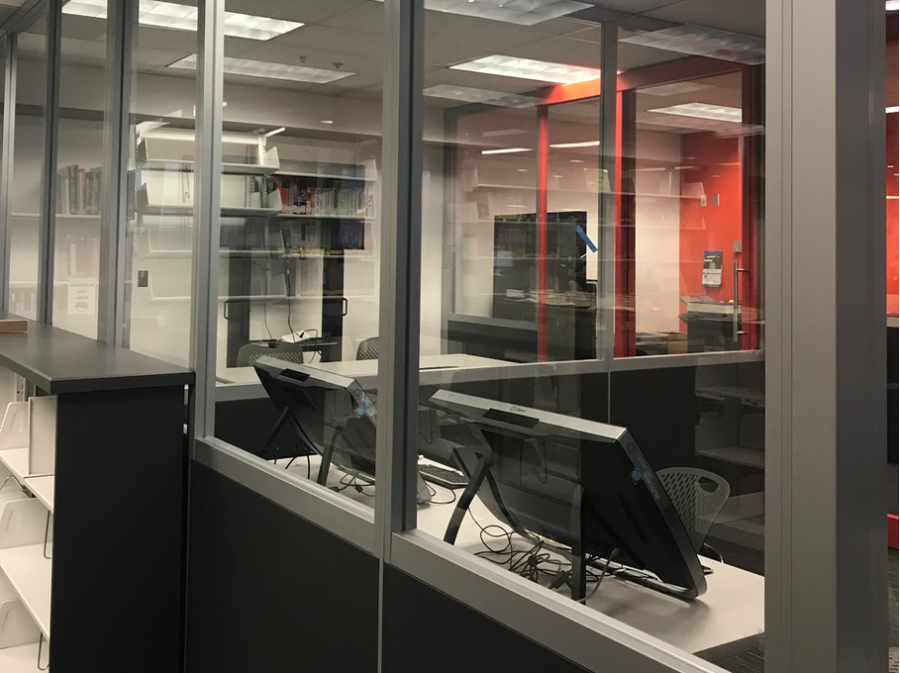 A close look at two of the new collaboration rooms, which are set to open soon.

Beaverton High School is finishing work on a new addition to the library aiming to allow students and teachers to collaborate easier. This is a continuation of the remodel which occurred about three years ago. Hopefully, this will give students more space to effectively study and work together. These rooms are a part of the new nationwide push for schools and universities to incorporate collaborative learning. Beaverton is the next school to hop on this bandwagon with its remodel.

The remodel consists of three glass-walled rooms situated to the far right of the main library doors. The walls of these rooms are glass, so students won’t feel isolated from the rest of the library as they study. These rooms come in different sizes, but each contains a table and some chairs, and at least one has a TV. Others contain monitors for students to use to further their learning. The books originally located where the rooms are now will be transferred to new homes in the coming week.

Librarians Teresa Kriel and Amanda Haselden say the normal library rules still apply within the collaboration rooms. They would like for students to be quiet, respectful, and please not bring food in. Even though the rules may seem more relaxed, snacks or lunches may not be eaten inside the collaboration rooms. The rooms are also not soundproof, meaning students can’t be too loud when working together.

Some students are skeptical of the addition. “I would maybe use them for a project or presentation for a class,” said sophomore Genevieve Brougham, “but I’m really not sure how well they are going to work with day to day school work.”

Freshman Elsa Heidrich echoed her response. “[I will use them] if I have to for class or if I’m with a different group of people and we need like, a specific space. Maybe I could see using them for studying with a group, but I don’t think I’ll use them in the near future.”

Junior Ariel Derting was more open to the idea of the collaboration rooms. She said she thinks “The library can get a little loud,” and she “might” use the rooms for class projects.

The library collaboration rooms are set to open in the next week or so, in early May.