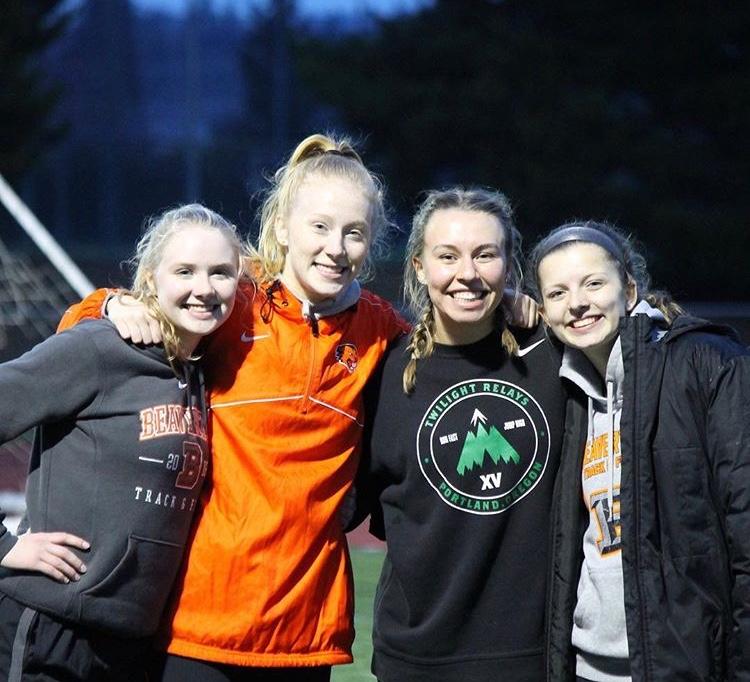 Left to right: Hailey Howard, Madilynn Johnson, Natalie Perkins, and Megan Elsom at the Mountainside meet after a successful meet.

As Beaverton’s track season kicks off, the team shows the league who’s in charge as they win the first two meets, first against Liberty and now in an impressive victory against Mountainside High School. Even though the Mavericks are a younger team, being only freshmen and sophomores, their team is massive. But they couldn’t intimidate the Beavers.

For the field events on the girls’ side, the shot put and discus both swept winning spots of 1, 2 and 3. The javelin throwers placed first and third place. Senior Sydney Namdar was a standout player, placing first in both shot put with a distance and PR of 36.5 inches and javelin with a distance of 111 feet 1 inch.

The boys swept in the high jump. Senior Logan Bedell placed first with a jump of 5 feet 10 inches. They also excelled in the long jump, pole vault, and triple jump. Many PR’s occurred in this meet, racking in points for the Beavers.

Junior Fatima Beltran-Alvarez was pleased with the meet and her performance. “I was really excited to have shown Mountainside the type of team we are. I did really well in this meet and hope that our team continues to reflect how hard we are all working on our meet results.”

After Beaverton crushed Mountainside, it is safe to say that the team started off the season strong. As one of the top teams in the district, anyone who is about to compete against Beaverton should watch out.