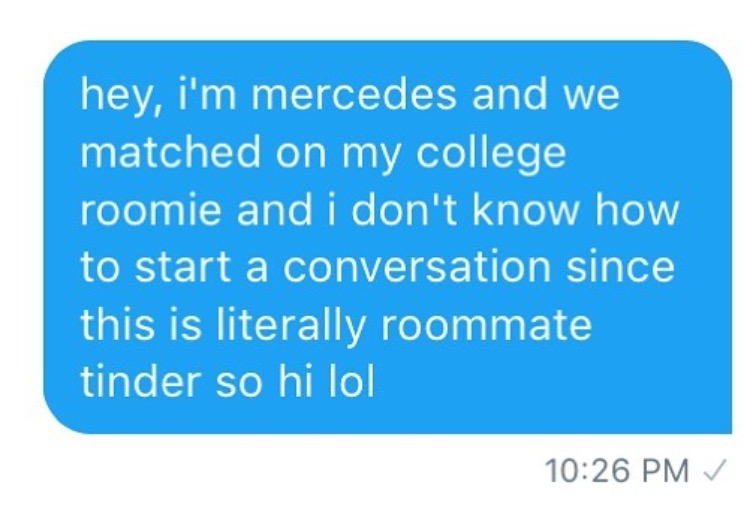 This past February, I’ve begun my endless search for a college roommate. In the fall, I’ll be moving to Corvallis and setting up my life in my new 10×10 dorm for the next year. And I won’t be doing this alone. Instead, I’ll be having a stranger live and sleep two feet away from me every single night. I don’t know about you, but when I sleep, it’s 100 percent me-time and I don’t want anyone near me at all if I don’t know you. The idea of some new person that I’m still trying to impress and not snore in front of gives my anxiety a field day.

For many colleges, your roommate search doesn’t have to be random. After filling out a questionnaire about your living habits and setting up your profile, you get matched with others who answered similarly to you. After setting up mine, I initially had about 300 matches, and every day, this number gets higher and higher. As I’m writing this, I have over 1,000. Unfortunately, there’s no filter for this system, so you can’t see people based on what hall they want to live in, interests, their major, or even their gender.

At this point, you get to look at each individual profile and decide if you want to message them or add them as a friend. If not, there’s a back button, and if so, most people have their social media handles in their bio. Time to stalk your prospects.

I can’t be the only one who’s done this, but the second a profile said, “Feel free to follow my Insta,” I immediately typed their name into my phone. Looking at social media profiles can be a great way to get an initial impression. On Twitter, you can see their retweets, likes, and people they follow, and you can see if they’re interesting or if your tweeting habits are similar. Don’t be afraid, and stalk all the Twitter bios and Instagram pics, because I guarantee that everyone else looking for a roommate will be doing the exact same.

The roommate matching website is Tinder for roommates. You find people you match with, message them, practically court them, and decide to room together. I’ve talked to a few people, but it hasn’t gotten to that point in the conversation where you ask to be roomies. Getting to know each other and each other’s interests and living habits is vital in making your decision. You can’t choose the nine people you’re talking to as your roommate, but those that don’t end up as your roommate can still be a new friend for school.

I have until May to find a roommate, and the pressure to message even one person is on. The bios you scroll through more and more often say, “I’ve already found my roommate, but we can still chat,” but no. I’m on a mission. The first match that appeals to me, I DM on Twitter and wait a day until she responds. Each passing second after the conversation starts, I’m left thinking, “Was it something I said? Did the smiley face give the wrong idea? Was I too polite? Was I rude? What’s wrong with me? I wouldn’t want to room with me either.” A shame.

A month in and I still have yet to find a roommate. Anticlimactic, I know. But the more people I talk to, the more I’m at a crossroads. This article was supposed to be advice, but I don’t know what’s going on and I have no hope in finding a roommate, so I hope you have better luck than I do.