Thoughts and prayers are no longer enough 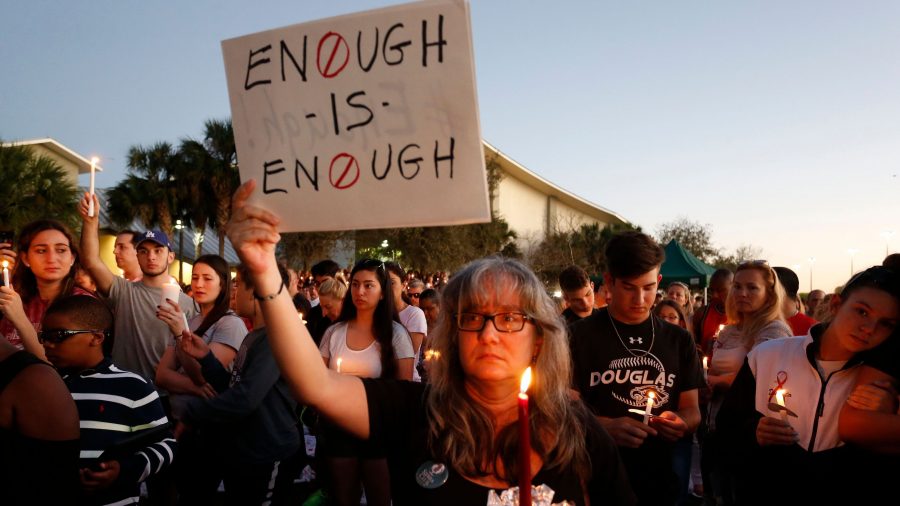 Protesters in Parkland fighting for the government to take action on gun control.

Valentine’s Day has forever been viewed as a romantic holiday where you get chocolates and flowers for a significant other, and perhaps even a card. That’s how the community in Parkland, Florida was treating it.

Cruz, who is 19 years old, had acquired about ten assault rifles within the past two years. At the time, he was living with James and Kimberly Snead, his friend’s parents. The family was aware of his gun collection and made him purchase a safe, which they would hold the key to. Regardless, Cruz still was able to access the weapons.

“I definitely don’t think that all precautions were taken,” said Miles Hoeckel, a junior at Beaverton and an active member of JSA. “I think it’s completely unreasonable that, for example, this kid could be on an official FBI watchlist and still be able to purchase a firearm and access any public place that he chooses to.”

The blame, he says, is mostly on state representatives and members of Congress. “I think one common misconception among those politicians who oppose gun legislation is they assume a hyperbolic view from the other side that bans all guns or makes it difficult to get guns,” Hoeckel said. “I call it common-sense legislation, where if you are on an FBI watchlist or a terrorist watchlist or have severe mental health issues that are known of by the state, you shouldn’t be able to get a gun.”

The problem is, gun control is considered a partisan issue, which makes it much more difficult to come to a solution. However, the rapid occurrence of mass shootings over the past few decades is making the need for change even more pressing.

The way that Miles describes it, this change can “even be a symbolic change that will stop this from happening again.”

Another step towards a safer America is a ban on unnecessary attachments, such as high-capacity magazines and bump stocks, which make it a lot easier to kill many people at once. They aren’t necessary for the intended use of protection against attackers or intruders.

Generations of young people are growing up in a world where gun violence and shootings seem to occur daily. We’re becoming desensitized to the matter because it seems like nothing is being done to stop it.

The time to act is now, and the students in Florida are a prime example of our capabilities to protest and seek change. But the change we want will only come from widespread efforts. This shooting shouldn’t have happened. We need to grieve and do what is necessary to stop this from happening again.