Why Donald Trump is necessary for American Democracy 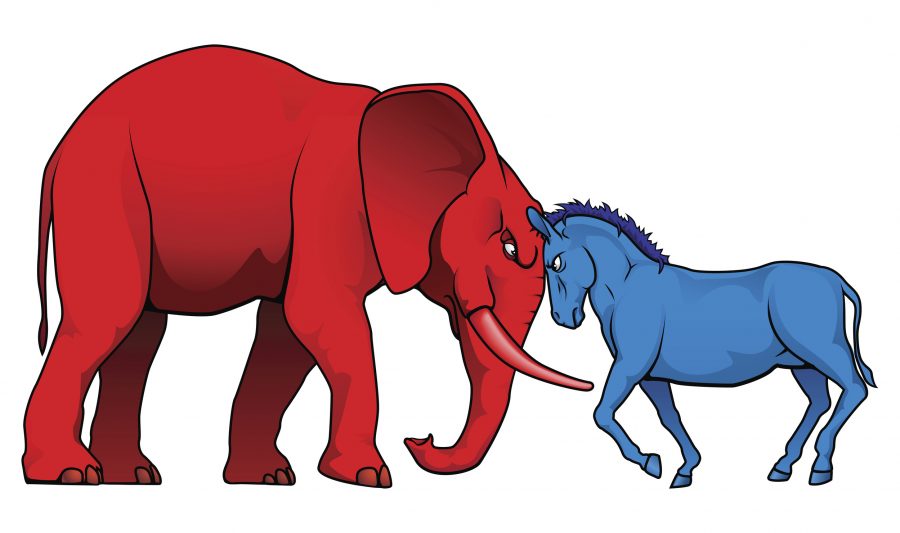 The democrat and republican symbols of a donkey and elephant facing off.

In the months both following and preceding President Trump’s inauguration, the United States of America has seen jarring internal clashes. People who should be getting along are not getting along, and vice versa.

In accordance with the trajectory of the American political spectrum, the void between Republican and Democrat grows, and though our government says it has a separation of church and state, the current administration and its actions are nothing short of schismatic.

Despite the contentiousness of the political fires that have been stoked between work colleagues, neighbors, and even high school students, this new America — one where all its citizens are engaged and responsive to its Government — has been the dream of our Founding Fathers. We [or the populous, at least] are fulfilling our role in American Democracy.

In other words, whether or not the ball is being withheld in the other side of the court, the actions of the People that the Government are instigating are, in some aspects, healthy for our version of Democracy.

Though it can be argued that the ideal country would not harbor such differences between its people and its government, we have bound ourselves to our Constitution, which has outlined a wide stage to fight safely, and given us the two teams to contend against one another.

We are, through practicing political discourse, playing the game for which the Constitution serves as the rule book.

A majority with content for their government will stop playing the game. If we are going to win so much that we are going to get tired of winning, as the President speculates, those who would consider themselves as “winning” will cease to find excitement in the workings of the Government and the political world.

As this happens, American Democracy will start to grow feeble, as the disagreed minority is forced into a highly energized and ineffective corner. Political input from the uninformed and content majority becomes languid, and their lazy domination of numbers smother their opposition like a wet wool blanket.

To end with well-articulated support, I turn to sci-fi author Frank Herbert.

“Liberty and Freedom are complex concepts. They go back to religious ideas of Free Will and are related to the Ruler Mystique implicit in absolute monarchs. Without absolute monarchs patterned after the Old Gods and ruling by the grace of a belief in religious indulgence, Liberty and Freedom would never have gained their present meaning. These ideals owe their very existence to past examples of oppression. And the forces that maintain such ideas will erode unless renewed by dramatic teaching or new oppressions. This is the most basic key to my life.”