Thoughts on the ban, political buzz, and Orwell 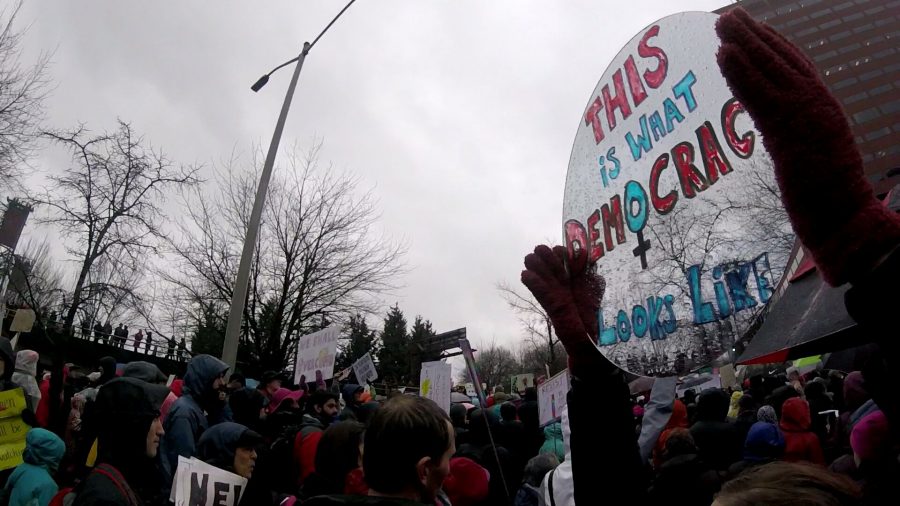 A protester at the January 21st Women's March in Portland holds up a mirror that reads, "This is what democracy looks like." The rallies attracted around 100,000 participants, easily one of Portland's largest.

It is becoming abundantly clear that this President of the United States is not ‘all bark and no bite’. Since officially taking office the Friday before last, on the 20th, President Trump has pushed the repeal of the Affordable Care Act (which you should know by now is the same thing as Obamacare), doubled border patrol numbers, given a green light for the construction of his ‘yuge’ wall, administered a communication blackout in the scientific community, and banned immigration from seven nations.

While it might be hard for some of us to understand the impacts of these measures, the wave of effects certainly make a splash in our small community in Beaverton, Oregon. Beaverton graduate Laila Mottaghi ‘15 was accepted into a student peace delegation that was scheduled to go to Iran. Due to the ban, this global involvement project has been put on hold. Mottaghi isn’t the only one who has been affected. Countless students with countless families have been blocked from returning or have found themselves trapped in a dangerous country or situation.

This is unacceptable under both parameters set by common sense and the Constitution of the United States. The United States now seems to be harboring a racist perception openly. This perception — President Trump’s perception — has been molded around a business model, and seems to reflect his blatant lack of empathy. Speaking of business models, it is painfully predictable that the countries to which this ban applies (Iran, Iraq, Syria, Yemen, Sudan, Libya and Somalia) excludes not only the nations whose citizens carried out the attack on 9/11, but also the countries with whom Trump has economic interests.

I am becoming weary on the matter. Seemingly every day, Trump says or does something that has the Hummer Newsroom bustling with a combination of political frustration and journalistic excitement. Such a combination is in many ways two tastes that should not fuse into one, yet collapse into one another and form one hell of an anxiety rush.

I was excited for the prospects of great articles to come, but now it seems as though we have fallen into a pit of routine. Never before have I seen absurdity becoming so commonplace that its curious nature becomes background noise. Politics and journalism have become so dull under the constant and violent force of the Trump-sander. We have dragged the blade of our knife over the same rock for so long, that we have lost our edge and with it our effect on the minds of readers. If you support Trump, chances of this liberal high school paper to sway you are next to none. If you harbor the same hellbent rage to destroy Republicanism (and any other opinion that isn’t yours, for that matter), the affirmative bias that we are giving you is nothing short of surplus.

Some words of advice from a weathered reporter: Stop just for one second and think about what you think. You’d be surprised about your thoughts on the matter, and how they might not be what you are definitely being force-fed from all angles. There are plenty of opinions out there, but we still sustain the ability to think freely and, for the love of all that is orange, individually. You can go to the rallies if you want, but don’t fall to the Orwellian forces that have set up camp on both sides of the political spectrum. Trump is trying to control minds, whatever. This newspaper is just as guilty.